Bengaluru Man Fails to Follow Tripartite Agreement of Sharing Time Equally Between Two Wives Due to Coronavirus Lockdown, Fist Wife Seeks Help From Police to Get Her Man Back

Due to the shutdown over coronavirus, the man got stuck at his second wife's home and couldn't reach to the residence of his first wife. 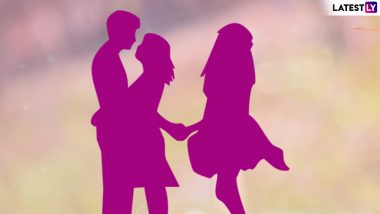 Bengaluru, April 11: A 45-year-old man has two wives and was following the tripartite agreement of sharing time with them until the nationwide lockdown was imposed. Due to the shutdown over coronavirus, the man got stuck at his second wife's home and couldn't reach to the residence of his first wife. In order to get back her man, the first wife has now approached the women's helpline number of Bengaluru police. Dubai Man Seeks Permit to Move Between Houses Of His Two Wives During Coronavirus Lockdown, Police Official Gives Bizarre Response.

According to a report by TOI, Aakash (name changed) is married to Varsha and the couple has a  child. After 10 years of their marriage, Varsha found out that Aaksh had an extramarital affair with Sonia. Aakash would divide his time between his two wives so carefully that none of them could know about each other. When the matter came to fore, he confessed being married to Sonia too. Subsequently, Varsha had approached Parihar, Bengaluru city police’s women’s helpline. Lockdown in India Extended by 2 More Weeks by PM Narendra Modi After His Video Conference With State CMs to Contain Coronavirus Transmission.

However, Aakash convinced her to withdraw the complaint. Elders from all the three parties got involved and it was decided that Aakash will take care of both of them and stay one week with one wife and the next with the other. On March 21, he was at Sonia's place and supposed to be at Varsha's house on March 28. However, on March 24, Prime Minister Narendra Modi announced nationwide lockdown over coronavirus and Aakash got stuck.

As Aakash didn't reach at her house on March 28, Varsha started calling him as she was running out of grocery items. He assured to return as soon as he gets an opportunity, but Varsha approached the women’s helpline. "Aakash told us that he’d arrange for supply of groceries to Varsha’s house. He assured us that he would follow the tripartite agreement he had entered into with his two wives once the situation normalised," senior counsellor Aparna Purnesh was quoted as saying.

(The above story first appeared on LatestLY on Apr 11, 2020 04:06 PM IST. For more news and updates on politics, world, sports, entertainment and lifestyle, log on to our website latestly.com).