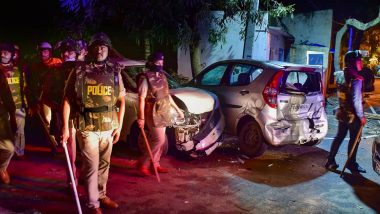 Bengaluru, August 15: Section 144 of the Criminal Procedure Code (CrPC), that bars the assembly of four or more persons in public, will remain enforced in DJ Halli and KG Halli areas of eastern Bengaluru till August 15. The decision was taken in view of the prevailing tensions in the region over a derogatory post against the Prophet of Islam and the clashes that erupted last night.

Bengaluru Police Commissioner Kamal Pant appealed the city residents to exercise restraint and maintain peace at all cost. He assured strict action against those who resorted to violence, while also claiming that the police will act against the elements responsible for spreading religious enmity. Telangana Police Warn Against 'Inappropriate Social Media Posts' After Violence In Bengaluru.

"The imposition of Section 144 of Code of Criminal Procedure in areas under DJ Halli and KG Halli police station limits extended till 6 am on 15th August," the Bengaluru CP said in a statement issued late on Wednesday.

The imposition of Section 144 of Code of Criminal Procedure (CrPC) in areas under DJ halli and KG halli police station limits extended till 6 am on 15th August: Bengaluru Commissioner of Police #BengaluruViolence

At least three people were killed in police firing and dozens left injured in the violence that erupted last night. An enraged mob also vandalised and allegedly attempted to burn the residence of Congress MLA Srinivas Murthy, whose nephew Naveen had shared the offensive post against the Prophet of Islam.

According to reports, the mob resorted to violence after they were allegedly told at the police station to sort out differences with Naveen while they were adamant on his arrest. Angered by the alleged police inaction, they burnt down several vehicles in the vicinity and resorted to vandalism.

Naveen was arrested, and around 110 protesters were rounded up in wee hours of the day following the violence. The police is using CCTV footages to identify more among the arsonists to crackdown on them.

Karnataka Home Minister Basavaraj Bommai condemned the violent protests, stating that due action would be taken against those who violated the law. In a video message issued today, he reiterated that the law should not taken into own hands by anyone.

(The above story first appeared on LatestLY on Aug 12, 2020 11:38 PM IST. For more news and updates on politics, world, sports, entertainment and lifestyle, log on to our website latestly.com).