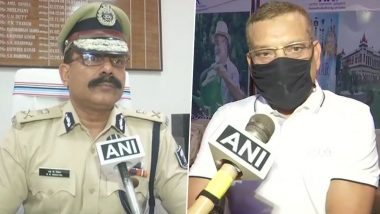 Patna, September 22: Bihar Director General of Police (DGP) Gupteshwar Pandey opted for voluntary retirement from service (VRS) on Tuesday. His request was approved by the Raj Bhawan, which led to his exit from the helm of state police department. The senior IPS officer has been replaced by Sanjiv Kumar Singhal. Bihar DGP Gupteshwar Pandey Hits Out at Rhea Chakraborty With 'Aukat' Remark.

SK Singhal would be taking over as the Bihar DGP on an interim period, till the state government decides on the posting. The decision on the appointment could also be taken by the Election Commission as the model code of conduct would come into effect after the poll dates are announced.

Singhal is currently the Director General of Civil Defence and Fire Services department. He has been given the additional charge of State DGP.

Pandey, 59, is expected to take the political plunge. According to local media reports, he is likely to contest in the upcoming assembly elections in Bihar.

The IPS officer has been hailed for his remarks on the ongoing probe in Sushant Singh Rajput's death case. Following the arrest of actress Rhea Chakraborty by the Narcotics Control Bureau (NCB), Pandey said it was a "big win for Bihar".

(The above story first appeared on LatestLY on Sep 22, 2020 11:53 PM IST. For more news and updates on politics, world, sports, entertainment and lifestyle, log on to our website latestly.com).