Bullet Train Name and Mascot Competition: How to Participate and Win Cash Prizes at mygov.in 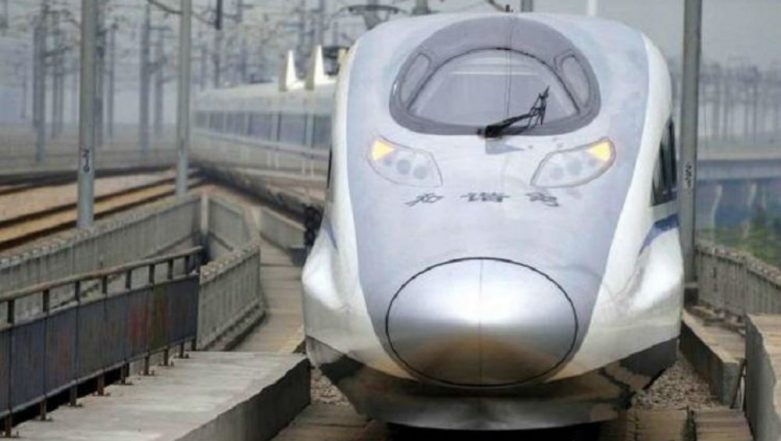 New Delhi, February 25: India’s first bullet train, which will run from Mumbai to Ahmedabad by 2022, is all set to get a new name and its own identity! For this, citizens now have a chance to win a whopping Rs 1 lakh cash prize- for designing a mascot and Rs 50,000 for naming the country’s first bullet train. The National High-Speed Rail Corporation Ltd (NHSRCL), which is executing the project, has invited entries suggesting names for the first bullet train via an online competition on mygov.in.

In a bid to encourage people’s participation, an open online competition has been organized on www.mygov.in, where participants can submit their entries till 25th March 2019. A spokesperson for NHSRCL said a name will provide an identity to the Japanese-made bullet train and help people to establish a connect with it. Mumbai-Ahmedabad Bullet Train Project: No Compromise on 'Quality and Parameters'.

Unleash the creative spirit in you and participate in the Logo and Mascot Contest for Mumbai-Ahmedabad High-Speed Rail. Win cash prizes up to Rs. 1,00,000. Visit: https://t.co/SYjQqGOHS0 pic.twitter.com/PavvDneahs

The NHRCL has asked for entries for the name and designing of mascot for the train by March 25. According to details available on the government website, the corporation has also invited designs for a mascot that will represent the train-like Air India’s Maharaja or Indian Railways’s Bholu, the train manager elephant.The winner stands to win Rs. 1 lakh. Japan Bullet Train Staff Made to Sit by Tracks as Part of Safety Training.

“The mascot essentially should be a well-designed character that will personify the value system of NHSRCL and will also be able to communicate effectively,” the NHSRCL spokesperson said. India to Purchase 18 Bullet Trains From Japan for Rs 7,000 Crore

The mascot essentially should be a well-designed character which will personify the value system of NHSRCL and will also be able to communicate effectively. Naming the bullet train will provide it an identity which will help people to establish a connect with the bullet train.

Participants should send different entries for both of these -

The selected entry will be awarded cash prize and five consolation entries will also be rewarded.

There will be five consolation prizes also in each category.

The name of the train and the mascot will be shortlisted through a nominated committee and the winners will be awarded a cash prize along with a certificate confirming their participation in the contest.

The Mumbai-Ahmedabad high speed rail will pass through twelve stations of Maharashtra, Gujarat and Union Territory of Dadra & Nagar Haveli and set the distance of 508 kilometers in about three hours.

The high-speed rail (HSR) project will give the country many benefits, such as savings in time, cost effective operating costs, reduction in pollution, creation of job opportunities, accidents / increase in safety, as well as an excellent technique. This project will strengthen the infrastructure and promote the development of the country's economy.