Chennai Woman Dies After an AIADMK Banner Falls on Her, MK Stalin Says It is Due to 'Negligence of Government And Inefficient Police Officers' 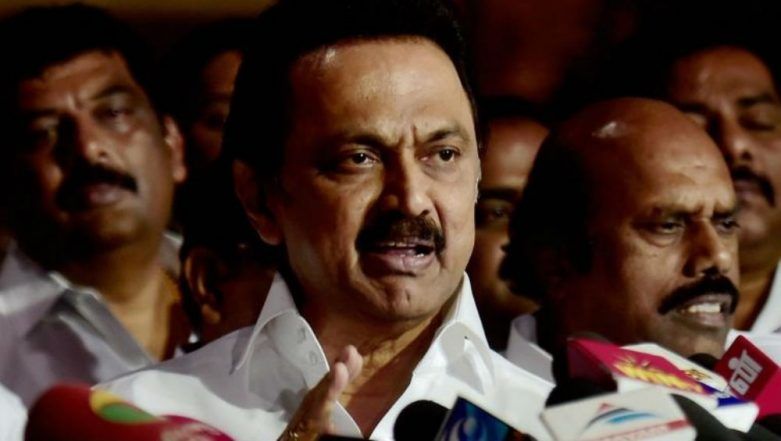 Chennai, September 13: In a tragic incident that took place on Thursday, a 22-year-old woman died after being hit by a water tanker when a banner erected by the AIADMK party allegedly fell on her while she was riding a two-wheeler.  The woman was later identified as Subashree. Pune Hoarding Collapse: FIR Registered Against Contractor and Workers.

According to an ANI tweet, commenting on the death of the girl, DMK President MK Stalin said, "Subashree has died due to negligence of government and inefficient police officers. Illegal banners have taken yet another life. How many more lives will be lost to power-hungry and anarchist rule?"

DMK Pres MK Stalin,on death of 22-yr-old in Chennai allegedly after AIADMK banner fell on her:Subashree has died due to negligence of govt&inefficient police officers.Illegal banners have taken yet another life. How many more lives will be lost to power hungry&anarchist rule? pic.twitter.com/NAQB6c8Oga

The incident took place when the woman was on her way back home from her office. She was riding a two-wheeler and was wearing a helmet. An advertising banner placed on a barrier in the middle of the road fell on her due after which she lost her balance. A water tanker hit her and she received head injury and was rushed to Kamakshi Hospital where she died.

Last year, a massive hoarding frame collapsed in Pune killing four and injuring nine. A huge hoarding frame installed on the railway land at Pune's Shahir Amar Shaikh Chowk near Juna Bazaar collapsed while it was being cut.