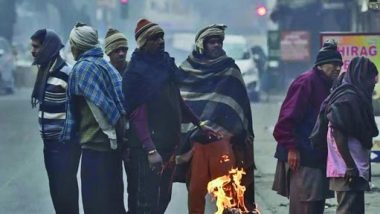 New Delhi, December 29: Delhi will continue to reel under severe cold wave conditions till December 31, 2020, the India Meteorological Department (IMD) said on Tuesday. According to details by Kuldeep Srivastava, Regional Head, IMD Delhi, cold wave conditions will persist in the national capital for the next two days. Srivastava informed that from January 1, abatement of cold conditions will begin and temperature will rise in the national capital. The official added that a western disturbance led to widespread snowfall in Jammu and Kashmir, Ladakh, Himachal Pradesh and Uttarakhand due to which the mercury dipped in the plains. La Nina in India: Country to Witness More Cyclones, Relatively Colder Winter This Year, Says IMD.

(The above story first appeared on LatestLY on Dec 29, 2020 02:19 PM IST. For more news and updates on politics, world, sports, entertainment and lifestyle, log on to our website latestly.com).