"We are mindful that by choosing to ignore the weight of evidence showing lives saved and public health improvements where risk-reduced nicotine products are allowed, WHO and its FCTC continue to press for signatory states to adopt ever more restrictive policies, including outright bans," AVI said. 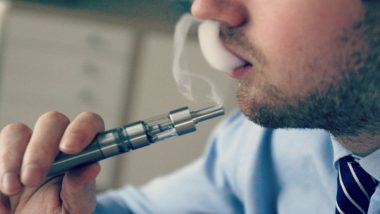 New Delhi, April 3: Ahead of a global meet in November 2020, vapers in India have written a letter to the Union Ministers asking to revise the government's position on smoke-free nicotine products such as electronic cigarettes and snus. In the letter, vapers asked the Union Minister for Health and Family Welfare Harsh Vardhan, Minister of Railways and Commerce Piyush Goyal, Minister of External Affairs Subrahmanyam Jaishankar and Minister of Finance and Corporate Affairs Nirmala Sitharaman dated March 13, 2020.

The Association of Vapers India (AVI) asked them to revise the government's position on electronic nicotine delivery systems (ENDS) ahead of the ninth session of the Conference of the Parties (COP9) to the World Health Organisation's Framework Convention on Tobacco Control (WHO-FCTC) which will be held in The Hague, Netherlands. Every member country of WHO, including India, has been asked to submit a summary of its position on ENDS. Is Vaping Safe? San Francisco’s Move to Ban E-Cigarette Sale Raises Valid Questions.

Scientific studies show that smoke-free nicotine products are much less harmful alternatives to combustible cigarettes because they do not produce smoke and tar. In the letter signed by board member Jagannath Sarangapani, AVI said that while the Indian government has already taken a position on ENDS by banning their sale through an ordinance and then passing a law in the Parliament last year, personal use and consumption is not prohibited.

"As the people affected by these decisions and as the Indian delegates to COP9 will be representing the electorate, we respectfully request that you share with us the details of our nation's position. We also request that the position takes into account the consumers' rights to choose less harmful products and the available scientific evidence," AVI said.

AVI said the consumers' position is important in making the FCTC more inclusive, which has repeatedly failed to pursue harm reduction as a core tobacco control policy over the past 18 years. India has an opportunity to bring to the global discussion the rights of those who use much less harmful smoke-free alternatives, the vapers said.

"As consumers and voters, we ask you to consider revising your position on ENDS and allow citizens of our country to choose non-pharmaceutical, non-combustible interventions that provide users with the nicotine they enjoy without the smoke and tar, such as ENDS (popularly known as 'e-cigarettes' or 'vaping'), which have been chosen and used by millions of consumers worldwide to easily, effectively and permanently switch from smoking combustible tobacco," AVI said.

"We are mindful that by choosing to ignore the weight of evidence showing lives saved and public health improvements where risk-reduced nicotine products are allowed, WHO and its FCTC continue to press for signatory states to adopt ever more restrictive policies, including outright bans," AVI said.

"India is among the nations to have succumbed to this pressure, but we also need to be mindful of our own interests, wherein a majority of our tobacco-using population has limited access to healthcare and hence exploring effective prevention measures such as harm reduction is vital to improving public health," AVI added.

AVI called on the Indian government and its delegates to COP9 to deplore the policy of FCTC to make its sessions closed-door, unaccountable and unreported, representing only vested interests whose actions have thus far impeded the rights of citizens and voters to make informed choices.

AVI said India's delegates to COP9 should instead represent the rights and aspirations of citizens whose taxes are paying for their attendance, who expect them to speak on their behalf and maintain democratic principles.This story is provided by NewsVoir. ANI will not be responsible in any way for the content of this article.