Elephant, Part of Wedding Procession, Goes on Rampage in Prayagraj, Groom and Baraatis Run for Cover

An elephant, which was part of a wedding procession, went on a rampage, prompting baraatis (guests) and the groom to run for cover. The incident took place at Amlapur village in Uttar Pradesh's Prayagraj. 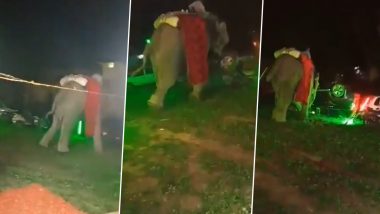 Prayagraj, June 12: An elephant, which was part of a wedding procession, went on a rampage, prompting baraatis (guests) and the groom to run for cover. The incident took place at Amlapur village in Uttar Pradesh's Prayagraj on the night of June 11. A video of the elephant creating ruckus at the wedding ceremony is going viral on social media. The animal was irked by the sound of firecrackers. Elephant 'Ram' Carries Out 'Revenge' Attacks on Villagers in Madhya Pradesh's Mandla After Death of Its Friend 'Balram'.

The baraat (wedding procession) of Anand Tripathi, the groom, reached Amlapur from Naryanpur village with an elephant. Upon their arrival, some people burst firecrackers to welcome the guests. The sound of firecrackers irked the elephant which then went on a rampage. The elephant destroyed a pandal set up for the wedding and toppled nearly half a dozen cars parked at the venue. Elephant Creates Chaos During Temple Festival in Kerala's Palakkad; Topples Car, Injures Mahout (Watch Videos).

In a video of the incident, the elephant is seen toppling a vehicle. The groom is also seen running for cover when the animal gets out of control. According to a report by India Today, people called police and the forest department and informed them about the situation. A team of police personnel and officials from the forest department arrived at the scene and managed to control the elephant.

After the video of the incident surfaced on social media platforms, people slammed the groom's family for "cruelty" towards the elephant. "I hate this culture of torturing animals for the sake of merriment, in the name of tradition. We must dump these old traditions," a netizen commented on the video.

(The above story first appeared on LatestLY on Jun 12, 2021 05:03 PM IST. For more news and updates on politics, world, sports, entertainment and lifestyle, log on to our website latestly.com).