A massive fire broke out at a warehouse in Delhi's Mundka area on Wednesday evening. 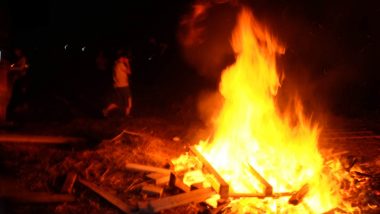 New Delhi, July 8: A massive fire broke out at a warehouse in Delhi's Mundka area on Wednesday evening. According to news agency ANI, 20 fire tenders were at the spot and efforts to extinguish the fire were underway. The cause of the fire was not immediately known. There was no immediate report about any person getting injured in the incident. Further details about the incident were awaited.

On Tuesday, a fire broke out at an office of the Ministry of Social Justice and Empowerment at the Shastri Bhawan in the national capital. No casualty was reported in the incident and the fire was brought under control within 25 minutes.

Fire Breaks Out at Warehouse in Delhi's Mundka Area:

Delhi: Fire breaks out at a warehouse in Mundka area; 20 fire tenders at the spot. More details awaited.

Last month, a major fire broke out on the third floor of the Rohini court in Delhi. A similar blaze had been reported at a chemical godown in Delhi's Swaroop Nahag area in the same month. Sixteen fire engines were rushed to the spot. No casualties were reported in these incidents.

(The above story first appeared on LatestLY on Jul 08, 2020 11:41 PM IST. For more news and updates on politics, world, sports, entertainment and lifestyle, log on to our website latestly.com).