Afzal Memon (not to confuse with the one who raised funds) is the managing trustee of GSWT. GSWT had once stated that it was applying for FCRA every year since 2003. But its application has always met with refusal considering its activities against public interest, it said. 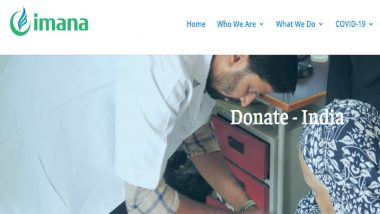 New Delhi, June 16: Funds worth tens of crores donated by well-meaning people from world over to help India in times of Covid crisis were stolen, DisinfoLab said in a disclosure. The Islamic Medical Association of North America (IMANA) collected money in the name of Covid crisis in India from all over the world, including from countries where India had sent Covid vaccines, thereby exploiting the goodwill that India and the Indians enjoy around the globe.

IMANA remained opaque about everything, from fund collection to its actual deliveries. Its chairman nonetheless seems capable of fluent lie in fluent English, claiming to have robust ground network of ‘Hindu and Sikh' friends. (Only he could explain the point of emphasising on religions). He was also in touch with the DRDO and the Indian Ministry of Agriculture for distributing the help, the disclosure said.

"However, in terms of delivery, till date they could manage 100-odd concentrators (that too in association with Saiyed Foundation which itself was collecting funds for the same). And in the end, the help was sent to GSWT affiliated Shifa Hospital, whose staff was arrested for illegal activities related to essential medicines during the crisis," it added. Covid Aid Scam 2021: US Based Pakistan-Linked Charities Collected Funds in the Name of Helping India During COVID-19 Crisis.

The disclosure said that the ‘Covid Scam 2021' was not merely a financial fraud. It was a sophisticated operation put in place. This whole farce pulled out by the so-called charity organisations was not merely a financial fraud, but it was a crime against humanity at multiple levels. The sinister designs to target India had been put in place to damage simultaneously from several angles, it said.

These include mopping up crucial funds at a critical time which could have saved lives, thereby further perpetuating the crisis, by exploiting the goodwill that India and Indians have acquired world over. The donations and advertisement campaigns further amplified the crisis in India, it said.

Despite their criminal agenda, they presented themselves as saviours, creating goodwill in India and abroad for future activities. The funds are likely used for other sinister activities, which in turn are going to target India again, it said.

It is worth noting that on April 26, US President Joe Biden had made a public appeal – that India had helped the US in its crisis, and now it was the US' turn to help. And lo and behold, several fund-raisers were set up on April 27 and 28 in the US by Islamist organisations being run from Pakistan, the disclosure said.

"This crisis and the scam have provided a window into the design and capabilities these entities have acquired over a period of time to target India. The sheer scale of this exercise is mind-numbing. It is obvious that this machinery has managed to create an eco-system which is self-sustainable from funding to marketing to delivery -- entities having close ties with radical Islamist and terrorist organisations, and being run in cahoots with the Pakistan army -- managing to raise funds in the name of India, exploiting India's hard-earned goodwill," it added.

Saiyed Foundation is a Texas-based 501(c)(3) organisation (Company No. 0802185645 & Tax ID 473598514). The foundation was registered in March 2015. However, within three years by 2018, it appears to have become defunct after failing to comply with tax filings, and the current status of it shows as inactive on various corporate registrars (The details were used from Texas Comptroller of Public Accounts), it said .

In the last six years of its existence, the foundation has NIL transactions -- zero receipts and zero expenses. It is likely that given no activity for continuously five years, the status of the foundation is shown as inactive.

Afzal Memon (not to confuse with the one who raised funds) is the managing trustee of GSWT. GSWT had once stated that it was applying for FCRA every year since 2003. But its application has always met with refusal considering its activities against public interest, it said.

As per IMANA's social media post updates, the IMANA-Saiyed Foundation's combined help of 100 oxygen concentrators landed at the Shama Hostel, which is a girls' hostel being run by GSWT. As per their claim, these concentrators were to be used at Shifa Hospital, also run by GSWT.

Unfortunately, on April 26, the Shifa Hospital was in news for all wrong reasons. During the peak of the Covid crisis, three people, including a staff of Shifa Hospital, were found to have been indulged in the illegal sale of Remdesivir. All of them were arrested following the incident.

(The above story first appeared on LatestLY on Jun 16, 2021 10:05 PM IST. For more news and updates on politics, world, sports, entertainment and lifestyle, log on to our website latestly.com).