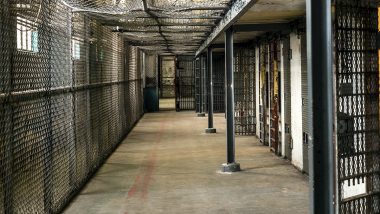 The trained inmates and staff lead the session which took place between 7 am to 9 am, the official said.

Director General (Prison) said, "We organized a magic show and a tug-of-war competition along with the yoga session in jail number 5 where the inmates between 18 to 21 years are lodged, while maintaining proper social distancing. The response was very good."

According to the data shared by officials, the number of active COVID-19 cases in Delhi prisons till June 15 stands at nine. As on Saturday, out of the total 1,139 inmates above 45 years of age in Tihar jail, 1,089 have received their first dose while 50 have received both the doses. A total of 990 below 45 years of age in this jail have also been vaccinated, officials said. Happy International Yoga Day 2021 Wishes, Greetings & HD Images: WhatsApp Stickers, GIF Messages, Facebook Quotes and SMS to Share on June 21.

A total of 601 inmates below 45 years have also been vaccinated, the data said. Since March this year, 382 cases of coronavirus have been reported among the prisoners of all jails, of which 365 have recovered and there are nine active cases, as per the data. Eight inmates have succumbed to the disease during this time.

Among the prison staff, 221 have been infected since March and all of them have recuperated. Officials had earlier said over 2,000 undertrial prisoners were released on interim bail, while around 700 convicts were released on emergency parole under the department's decongestion drive amid the pandemic. International Yoga Day 2021 Theme Is ‘Yoga for Wellness’ That Focuses on Practising Yoga for Physical and Mental Well-Being.

The first case of coronavirus was reported in Rohini Jail on May 13. Two COVID-19 positive inmates of Mandoli Jail died on June 15 and July 4. Both were senior citizens.

Officials had said ever since the outbreak of the pandemic in March last year, the Prisons Department remained vigilant and instructed its staff to not only maintain hygiene and social distancing among themselves but also spread awareness about the infection among inmates in the three jail complexes.