Jammu and Kashmir: Two Militants Killed in Encounter With Security Forces in Pulwama 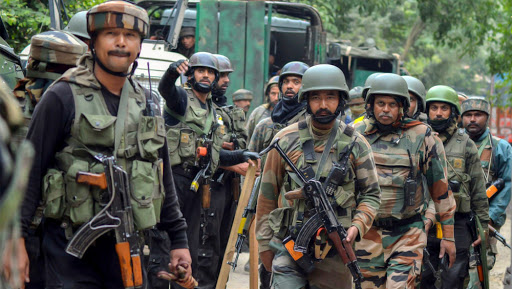 Srinagar, January 12: A day after Indian Army Chief Major General Manoj Mukund Naravane said that the elite security forces have the ability and are ready to occupy the Pakistan Occupied Kashmir (PoK), encounter between security forces and militants erupted in Tral area of Pulwama on Sunday. At least two militants were reported to be killed a couple of hours after the gunfire broke out.

According to reports, the personnel from Central Reserve Police Force, Special Operations Group of Jammu and Kashmir Police and 42 Rashtriya Rifles are currently positioned in the Tral area. On Saturday, Hizbul chief Naveed Babu and his close associate arrested. Jammu & Kashmir: 19 Civilians Killed by Terrorists Since Article 370 Repeal on August 5, Says MHA.

Earlier on Friday, two unarmed civilian porters were killed and three others injured when the Pakistan Army fired mortar bombs at forward posts along the LoC in Jammu and Kashmir's Poonch district. Even grenade attack was reported on Wednesday at Srinagar's Habab Chowk, where a group of Central Reserve Police Force (CRPF) jawans were stationed. No casualties were so far reported in what appeared to be an insurgent attack.