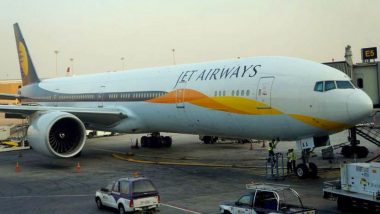 New Delhi, October 17: Will the Jet Airways make a comeback? The airline which was grounded last year could takeoff once again if the Ministry of Civil Aviation approves the resolution bid of Karlock Capital-Murari Jalan. The resolution plan submitted by the venture was approved on Saturday by the Committee of Creditors. ED Opposes Closure of Probe Against Jet Airways Promoter Naresh Goyal in Cheating Case.

Murari Jalan, a UAE-based businessman, had partnered with London's Karlock Capital to propose a plan for reviving the cash-strapped airlines' operation. A majority of officials on the board of Jet Airways' Committee of Creditors backed his resolution bid.

The plan has been approved, confirmed Grant Thornton's Ashish Chhawchharia -- resolution professional in charge of Jet Airways. Karlock Capital and Murali Jalan are now expected to file for an approval before the Civil Aviation Ministry in the next few weeks.

Also I am told by knowledgeable people aware of the subject it will be still six months before the airline can fly. pic.twitter.com/dbbOsoxoJ8

The resolution plan would next be submitted before the National Companies Law Tribunal (NCLT), which is hearing the insolvency proceedings of Jet Airways. Reports claim that if the resolution plan succeeds in achieving the regulatory approval, the grounded airlines could be revived in next six months.

Notably, Jet Airways, once the largest private commercial airliner of India, ceased operations from April 17, 2019. The pile of debt on the flyer eventually led to its bankruptcy. It was forced to ground all its flights after the lenders rejected its request of Rs 4 billion emergency funding.

(The above story first appeared on LatestLY on Oct 17, 2020 03:27 PM IST. For more news and updates on politics, world, sports, entertainment and lifestyle, log on to our website latestly.com).