Maharashtra Bandh Today in Solidarity With Farmers Over Lakhimpur Kheri Incident, Know What’s Open and Shut In the State

The Maha Vikas Aghadi (MVA) allies- the Shiv Sena, NCP, and Congress has called for a statewide bandh today, October 11 in view of the Lakhimpur Kheri violence in Uttar Pradesh in which a total of eight people including four farmers lost their lives. 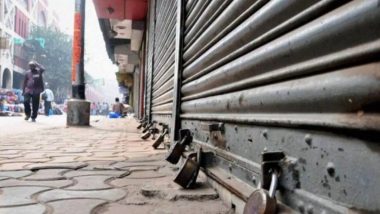 New Delhi, October 11: The Uddhav Thackeray-led Maha Vikas Aghadi (MVA) government in Maharashtra has called for a statewide bandh today, October 11. The shutdown has been announced in view of the Lakhimpur Kheri violence in Uttar Pradesh in which a total of eight people including four farmers lost their lives. It must be noted that the shutdown has been called by the Maha Vikas Aghadi (MVA) which comprises of Shiv Sena, NCP, and Congress. The police official said patrolling will be intensified. A total of eight people including four farmers died in violence in the Lakhimpur Kheri district in Uttar Pradesh that took place on October 3.

A union of traders in Maharashtra that earlier objected to the state government calling a bandh on Monday has decided to support the bandh. According to Mumbai Police, security has been deployed at strategic points, with 3 companies of SRPF, 500 Home Guards, and 700 men from Local Arms units.

Maharashtra Bandh: What Will Remain Open and Shut

After the MVA government announced a shutdown, the Bharatiya Janata Party (BJP) had opposed the 'Maharashtra Bandh' announced by the MVA. BJP MLA Nitesh Rane has warned the state government not to shut shops forcefully. Meanwhile, Maharashtra minister Nawab Malik was quoted urging the people of the state to support the bandh in solidarity with farmers. "I request 12 crore, people of Maharashtra, to support the farmers. Support means all of you join the bandh and stop your work for a day," he said.

(The above story first appeared on LatestLY on Oct 11, 2021 09:27 AM IST. For more news and updates on politics, world, sports, entertainment and lifestyle, log on to our website latestly.com).