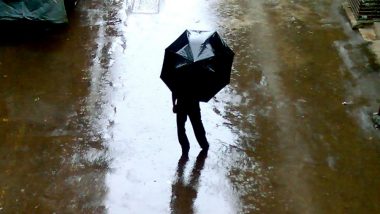 Mumbai, July 6: The Indian Meteorological Department on Monday predicted heavy rainfall at isolated places in Mumbai and adjoining districts in next 24 hours. Apart from this, the Met department issued an extremely heavy rainfall warning for the Saurashtra region.

Earlier on Sunday, IMD predicted intermittent moderate to heavy rain expected in Mumbai and suburbs in the next 24 hours. Also, the Met department issued an advisory for the fishermen not to venture into along and off the sea-coast during July 5 and 6.

(The above story first appeared on LatestLY on Jul 06, 2020 10:24 AM IST. For more news and updates on politics, world, sports, entertainment and lifestyle, log on to our website latestly.com).