Senior Bharatiya Janata Party (BJP) leader Murli Manohar Joshi on Thursday demanded the removal of Vice-Chancellor M Jagadesh Kumar over the attack on Jawaharlal Nehru University (JNU) students on the campus. The senior BJP leader in a tweet lashed out at Kumar for being “adamant". 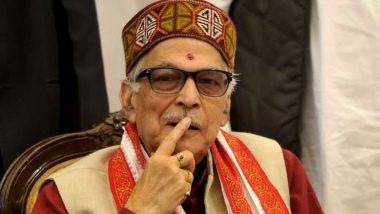 Joshi said, “Reports are, that the HRD ministry had twice advised the JNU VC to implement certain reasonable and working formula for resolving the issue of enhanced fees in JNU.” Adding further, the former HRD minister called it shocking that the JNU VC is adamant for not implementing the government proposal. He stated, “This attitude is deplorable, and in my opinion, such a VC should not be allowed to continue on his post."

JNU students then took out a protest march from Mandi house. Several students were detained by the Delhi Police when they were marching towards Rashtrapati Bhawan. Ghosh said that they would not compromise over their demand seeking the ouster of the VC.

On Sunday, a mob of 50 people entered the university as thrashed students on the campus. The JNUSU president was also injured in the attack. Till now, no arrest has been made in the case.

(The above story first appeared on LatestLY on Jan 09, 2020 09:01 PM IST. For more news and updates on politics, world, sports, entertainment and lifestyle, log on to our website latestly.com).