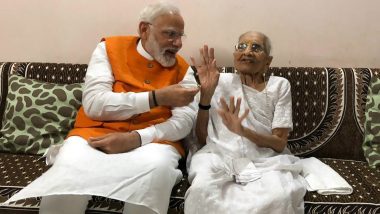 London, March 3: A caller on BBC Asian Network's "Big Debate" radio show abused Prime Minister Narendra Modi's mother Heeraben Modi over Farm Laws. The audio clip for the episode of the radio show is going viral on social media. The episode sparked outrage as the caller used derogatory remarks against PM Modi's mother when he was asked a question by an anchor of the show. Later, the anchor issued apology in the edited show.

The debate was about racism against Sikhs and Indians in the United Kingdom. The show was hosted by Priya Rai. During the three-hour-long show, the anchor received several callers. One of the callers named Simon started to abuse Heeraben in Punjabi over the farm laws enacted by the India government in September last year. Facebook Row: IT Minister RS Prasad Writes to Mark Zuckerberg, Says Problematic When FB Employees Abuse PM Narendra Modi 'On Record'.

After the audio clip went viral, social media users slammed the BBC network. #BoycottBBC and #BanBBC started to trend on Twitter. One of the Twitterati said that on the show, not only PM Modi's mother was abused, but each woman in India was disrespected. According to reports, the programme was edited, and that part of the show in which the caller abused PM Modi's mother was removed. Imran Khan Trolled by Pakistan Media For Falsely Claiming That PM Narendra Modi Apologised to Indians For Coronavirus Lockdown.

"Every Indian's mother has been abused, ban BBC in any case."

No Modi's mother on BBC show

Every Indian's mother has been abused, ban BBC in any case

"They disrespected each woman of India, each Mother of India"

Not only Modi's mother has been abused in BBC, but they disrespected each woman of India, each Mother of India...

"Will Not Tolerate Insult of India's Mother"

"Section 2.3 of Broadcasting Code Has Been Breached"

The presenter is required to be prosecuted for her offence. How one can transmitt offensive material ?#BanBBC #BoycottBBC@narendramodi@AmitShah

"We would like to apologise for the language used by a guest earlier. It’s a live show and we discuss controversial issues but there was no reason for the type of language that was used and I’d like to say sorry again for any offence that was caused," reported Hindustan Times quoting Rai as saying.

Notably, Farmers in India, especially from Punjab and Haryana, are protesting against the farm laws. They fear that these laws will dilute the Minimum Support Price (MSP) by destroying APMCs. Farmers are protesting at Delhi borders against the three farm laws since November 26, 2020. They are demanding the repeal of the controversial laws, but the Indian government offered only amendments.  Till now, 11 rounds of talks have taken place between farmers' leaders and the Centre, but all of them remained inconclusive.

(The above story first appeared on LatestLY on Mar 03, 2021 07:06 PM IST. For more news and updates on politics, world, sports, entertainment and lifestyle, log on to our website latestly.com).