PM's Letter to 10 Crore Families on May 29, Virtual Rallies is How BJP Will Mark Completion of One Year of Narendra Modi Government 2.0 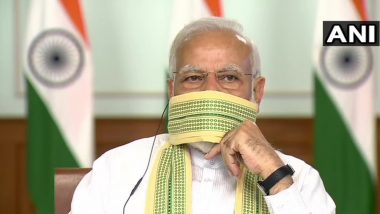 New Delhi, May 28: The Bharatiya Janata Party (BJP) has decided to organise one virtual rally per district to commemorate the completion of one year of Narendra Modi government. The party will also reach out to 10 crore families through a letter by Prime Minister Narendra Modi which will detail policy decisions of the government to make country self-reliant and precautions that need to be taken to prevent COVID-19 spread, informed Bhupendra Yadav, party's National General Secretary.

"The party has decided that Prime Minister's message through his letter where issues like self-reliant India, the situation of COVID-19, fight against the infection along with stress on vocal for local will be sent to 10 crore families," stated Yadav.

The senior leader also stated that the letter will be distributed by two workers per booth.

"As this is a time when social distancing is the mantra to prevent COVID-19 we have decided that only two workers per booth will distribute the letter," said Yadav.

"Every district will witness one virtual rally where issues like self-reliance, COVID-19 status and measures to fight it, social awareness will be discussed," the senior BJP leader added.

On questions of the mode of campaigning in poll-bound states like Bihar and Madhya Pradesh, Yadav said the party will evolve with time and will use technology.

"During 1950-70 we saw the role of pamphlets and posters in campaigning which changed to the radio till the 90s. During the 90s we saw a revolution in campaigning brought by the TV. Today we saw how WhatsApp and Facebook were used. We will use a new technique in elections," added Yadav.