As many as 20 Muslim leaders, including women were arrested by the police on Sunday afternoon after they gathered in the Juhapura area in Ahmedabad to organise a march without permission, to protest against BJP's former spokesperson Nupur Sharma's statement on Prophet. 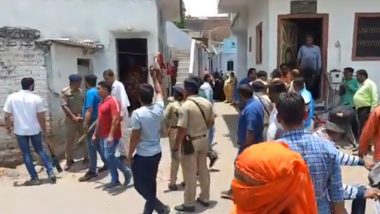 Ahmedabad, June 12: As many as 20 Muslim leaders, including women were arrested by the police on Sunday afternoon after they gathered in the Juhapura area in Ahmedabad to organise a march without permission, to protest against BJP's former spokesperson Nupur Sharma's statement on Prophet.

Police tried to convince them to return home, but when they did not agree and tried to proceed, police had to resort to a mild lathi-charge to disperse the mob.

Ahmedabad Zone-7 Deputy Commissioner of Police B.U. Jadeja told the media, "Since Saturday evening, fake messages were in circulation on social media about a protest march to be organised in the Juhapura area. To ensure that no untoward incident occurs, police were deployed well in advance in the area." Prophet Muhammad Remarks Row: Strict Action To Be Taken Against Offenders, NSA Ajit Doval Assures Iran.

Police were expecting that large numbers of women would join the march, and women police too were deployed in the area. In the afternoon, when they attempted to march, police stopped them and some leaders were arrested while rest were convinced to return home, said the officer. Heavy police deployment has been made in the area.

The arrested Muslim leaders were taken to Vejalpur police station in Ahmedabad.

In another development, Surat police have arrested five persons for printing and circulating posters of Nupur Sharma. These posters were posted in Kadarshani Nal Road area in Surat city, they had even circulated video of posters on social media.

Surat's Deputy Commissioner (Zone-3) Sagar Bagmar told the media that these posters were printed and circulated with an intention to create communal enmity in the society, based on technical surveillance, these five persons were identified and arrested by the police. In the video and posters they had printed, "Now we need to turn Gujarat into Uttar Pradesh and Jharkhand."

(The above story first appeared on LatestLY on Jun 12, 2022 07:09 PM IST. For more news and updates on politics, world, sports, entertainment and lifestyle, log on to our website latestly.com).