The area around the Intelligence Bureau office has been sealed and investigation is in progress. A bomb disposal and forensic squads have been positioned at the spot. 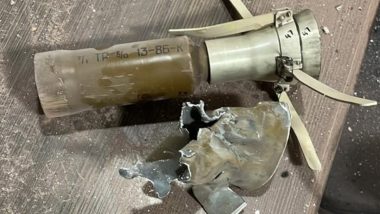 Chandigarh, May 9: A blast, caused by a rocket-like object, reportedly occurred in Punjab's highly-guarded Intelligence Bureau headquarters in upscale Sector 77, Mohali, near here on Monday evening. However, no casualty was reported. It is learnt that it was an attack on the third floor of the building, an official said.

The area around the Intelligence Bureau office has been sealed and investigation is in progress. A bomb disposal and forensic squads have been positioned at the spot. Chief Minister Bhagwant Mann spoke to Director General of Police V.K. Bhawra and sought details about the incident. As per the press communique, a minor explosion was reported at the Punjab Police Intelligence headquarters at around 7.45 pm. Mohali Blast: Explosion Outside Office of Punjab Police's Intelligence Unit in Sector 77, Say Sources.

No damage has been reported. Senior officers are on the spot and investigation is being done, it added. The attack came four days after arrest of Pakistan-backed terrorists in Haryana's Karnal by the state police following inputs from the Punjab Police. Describing the arrest of four Pakistan's ISI-backed terrorists and preventing a major terror attack as a well coordinated operation, Punjab Police on May 5 said they successfully averted a possible terrorist attack.

However, police officials refuted claims of attempts by the ISI to revive terrorism in the state, saying such acts were part of its nefarious designs. The arrested accused were identified as Gurpreet Singh, Amandeep Singh and Parminder Singh, residents of Vinjoke village in Zira, Ferozepur; and Bhupinder Singh of Bhatian village in Ludhiana. DGP Bhawra had told the media here that a Central agency earlier shared an input that some suspects, who may be carrying explosive material and weapons are moving in the border districts of Fazilka and Ferozepur.

During preliminary interrogation, the accused had revealed that they were working for Pakistan-based gangster-turned-terrorist Harwinder Singh, alias Rinda. Rinda, a notorious gangster active in Punjab, Chandigarh, Maharashtra and Haryana, is a history-sheeter and is wanted by the Punjab Police in heinous crimes, including murder, contract killing, robbery, extortion and snatching. Also this blast occurred came almost a fortnight after the recovery of an explosive device near the high-profile Burail jail in Chandigarh.

(The above story first appeared on LatestLY on May 10, 2022 10:17 AM IST. For more news and updates on politics, world, sports, entertainment and lifestyle, log on to our website latestly.com).