The demands of the farmers include full loan waiver, stopping auction of land and arrest of farmers, payment of sugarcane crop with 15 per cent interest. 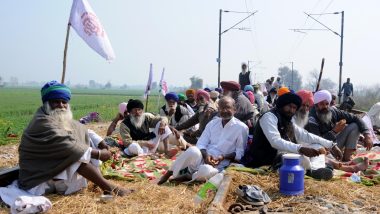 Amritsar, March 6: Rail services in Punjab were severely hit on the Amritsar-Ludhiana-Delhi route as farmers' protest entered the third day on Wednesday. The farmers' have been protesting for their long-pending demands which include full loan waiver, stopping auction of land and arrest of farmers, payment of sugarcane crop with 15 per cent interest. Farmers were seen protesting on the Amritsar-Delhi rail track in Jandiala, thus paralysing rail and road services in the state. Farmers in Punjab Protest in Amritsar, Block Railway Tracks.

The farmers are staging a protest to press for various demands, including the implementation of the recommendations of the Swaminathan Commission report. They have been squatting on the rail tracks in Amritsar in support of their demands since March 4.

In the wake of the protest, at least 25 trains were cancelled and eight others diverted on Tuesday as protesting farmers blocked railway tracks. A statement by the Northern Railways said that the agitation has left several passengers moving to and from Amritsar stranded.

In the wake of the protest, the trains which remained cancelled include the New Delhi-Jalandhar Intercity Express, Amritsar-Haridwar Jan Shatabdi Express, Haridwar-Amritsar Jan Shatabdi Express, Chandigarh-Amritsar Superfast Express and the Nangaldam-Amritsar Express. Reports inform that as many as six trains which were scheduled to depart from Amritsar now would depart from Beas, Ludhiana, Phagwara and Umbala.

Several trains were delayed and rescheduled while some diverted via different routes. The trains that were diverted include the Delhi-Pathankot Superfast Express, Amritsar-New Delhi Shatabdi Express and the Amritsar-Sealdha Akal Takht Express.

The protest is being led by committee president Satnam Singh Pannu at Devidaspura, around 22 kilometers from Amritsar. The Chief alleged that farmers were being harassed and humiliated by banks and other financial institutions for their failure to repay loans. According to reports, Pannu claimed that the farmers were not being paid sufficient dues of their yield.

On Tuesday, a petition seeking removal of farmers protesting on Amritsar-Delhi rail track was filed in the Punjab and Haryana High Court. The court issued notices to Punjab, Centre and leaders of farmers’ outfit Kisan Mazdoor Sangharsh Committee and asked them to appear before it on Wednesday.

(The above story first appeared on LatestLY on Mar 06, 2019 10:03 AM IST. For more news and updates on politics, world, sports, entertainment and lifestyle, log on to our website latestly.com).