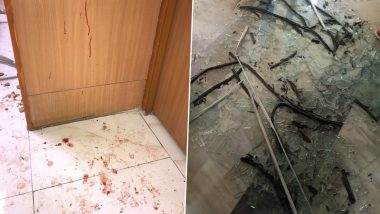 New Delhi, December 24: AAP Leader Raghav Chadha on Thursday claimed that BJP workers attacked and vandalised the Delhi Jal Board Office. Chadha tweeted, " BJP goons have attacked the @DelhiJalBoard headquarters. My entire office has been vandalized. Staff has been threatened." He is the vice-chairman of the Delhi Jal Board. The AAP leader will address a press conference at 4 PM today regarding the same at the party's headquarters. Arvind Kejriwal Under House Arrest? AAP Alleges CM Not Allowed to Step Out Since His Visit to Singhu Border, Delhi Police Deny Accusation.

“I will address an Important Press Conference at 4pm at @AamAadmiParty Headquarters on this violent attack by BJP and the real reason behind it,” tweeted Chadha. Meanwhile, AAP has alleged that BJP's Delhi Chief Adesh Gupta led the workers to attack the Delhi Jal Board Office. "Attack on @raghav_chadha's office was led by Delhi BJP Chief @adeshguptabjp Adesh Gupta led the violent mob and vandalized the office," tweeted AAP's official handle. Manish Sisodia's Residence in Delhi Attacked by BJP Goons: AAP.

BJP goons have attacked the @DelhiJalBoard headquarters. My entire office has been vandalized. Staff has been threatened. pic.twitter.com/iEwhaGBYRB

"What kind of goondaism is this int he national capital? First they house arrested CM @ArvindKejriwal. Then they attacked Dy CM @msisodia’s family. And now this deadly attack on the office of @raghav_chadha. @AmitShah is not able to forget the defeat in the election and is resorting to all this,” said AAP leader Sanjay Singh.

(The above story first appeared on LatestLY on Dec 24, 2020 03:52 PM IST. For more news and updates on politics, world, sports, entertainment and lifestyle, log on to our website latestly.com).