Union Minister Ramdas Athawale on Thursday raised a demand for a piece of land for the construction of a Buddhist temple in Ayodhya, Uttar Pradesh. 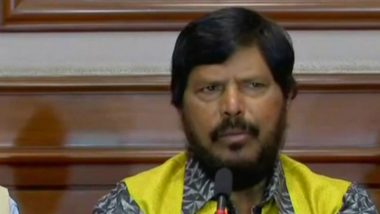 Mumbai, February 20: Union Minister Ramdas Athawale on Thursday raised a demand for a piece of land for the construction of a Buddhist temple in Ayodhya, Uttar Pradesh. He said he would soon meet Uttar Pradesh Chief Minister Yogi Adityanath regarding this demand.

"I want that around 10 to 20 acres of land should be allotted to the Buddhists and a grand Buddhist temple should be built in Ayodhya. I will soon be meeting UP Chief Minister Yogi Adityanath," Athawale told ANI. Amit Shah Says 'A Magnificent Ram Mandir Will Be Constructed in 4 Months in Ayodhya'.

The Supreme Court in the Ram Janmabhoomi-Babri Masjid title suit verdict last year gave the disputed site to the Hindus for construction of a Ram temple and ordered UP government to give 5 acres of land to the Sunni Waqf Board at an alternate place in Ayodhya for the construction of a mosque.

Athawale said: "If my demand is not taken into consideration, we the people who believe in Buddhist thoughts will form a trust, acquire a piece of land in Ayodhya and construct a Buddhist temple there."

Athawale said there were many Buddhist temples in India during the reign of Emperor Ashoka, before the influence of Hinduism increased."With the influence of Guru Shankaracharya and Hindu religion, temples were constructed at several places," he said.

"Later, when Mughals came to India, they started constructing mosques by demolishing the temples. However, the government has decided to pursue the construction of Ram Temple after the Supreme Court's decision," he added.