According to reports, the pilgrim was trampled to death in a forest area which was 60 km from Kerala's Kottayam. The deceased has been identified as 35-year-old Paramasivam from Salem in Tamil Nadu. 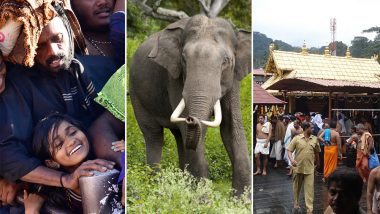 Kochi, January 10: In a tragic incident, a pilgrim from Tamil Nadu who was heading to the Lord Ayyappa temple at Sabarimala in Kerala, was crushed to death by a wild elephant on Wednesday. According to reports, the pilgrim was trampled to death in a forest area which was 60 km from Kerala's Kottayam. The deceased has been identified as 35-year-old Paramasivam from Salem in Tamil Nadu.

According to a report by PTI, the man was attacked by the elephant while he, along with his seven-year-old son and 13 others, were heading to the shrine. According to details by Police, the incident took place when the pilgrims were walking through the forest route from Erumely to Pamba at around 1 am. History of Sabarimala: Why Women Weren't Allowed Into The Lord Ayyappa Shrine.

Violent protests have taken place over the past few months at the shrine complex and nearby areas including the base camps since the shrine was opened for the five-day monthly Puja on October 17. Reports inform that as many as 1,369 people have been arrested and 801 cases registered in connection with violent protests over the entry of women in the 10-50 age group in the shrine. Sabarimala Temple: Four Transgenders Offer Prayers at Lord Ayyappa Shrine.

On September 28, the Supreme Court in its landmark verdict paved the way for the entry of women of all ages into the Ayyappa temple at Sabarimala. The five-judge constitution bench headed by Chief Justice Dipak Misra, in its 4:1 verdict, said that banning the entry of women into the shrine is gender discrimination and the practice violates rights of Hindu women.

While the CJI had said religion is a way of life basically to link life with divinity,  Justice Malhotra, the lone woman judge in the bench, passed a dissenting judgement and said that issues which have deep religious connotation should not be tinkered with to maintain a secular atmosphere in the country.

(The above story first appeared on LatestLY on Jan 10, 2019 04:43 PM IST. For more news and updates on politics, world, sports, entertainment and lifestyle, log on to our website latestly.com).