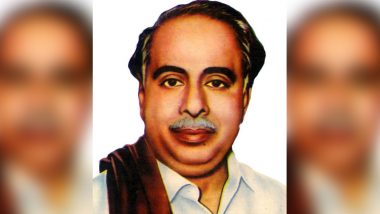 Kanyakumari, July 30: A saffron cloth was found tied in the railing surrounding the statue of Dravidian stalwart, the late Tamil Nadu Chief Minister C N Annadurai in this district on Thursday, prompting angry responses from political parties including the ruling AIADMK and DMK.

Some litter was also reportedly found there. Deputy Chief Minister O Panneerselvam slammed the "insult" and warned the government will take strict action against those desecrating statues of leaders.

The incident in Kuzhithurai in the district comes close on the heels of a statue of reformist leader, the late EVR Periyar in Coimbatore being daubed with saffron paint, with the member of a fringe Hindu outfit surrendering in connection with the incident. COVID-19 Death Toll in US Surpasses 150,000: Johns Hopkins University.

"I strongly condemn the insult to the statue of Anna by miscreants who had also tied a saffron cloth. The Amma government will take stringent action against those insulting leaders and affecting law and order and disrupting social harmony," Panneerselvam, also AIADMK Coordinator, said in a tweet.

"Since they have no individuality, they are targeting such great late leaders," he tweeted, without naming anyone and demanded arrest of the culprits.

Earlier, in the nearby Puducherry union territory, a saffron cloth was found wrapped on the statue of AIADMK founder, the late chief minister M G Ramachandran, drawing widespread condemnation.