Sahara chief Subroto Roy is expected to appear before the Patna High Court on Thursday to explain how he would return the money of investors. 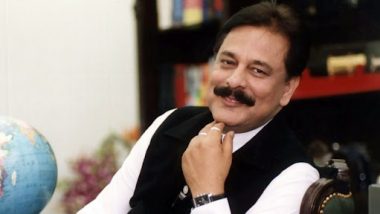 Patna, May 12: Sahara chief Subroto Roy is expected to appear before the Patna High Court on Thursday to explain how he would return the money of investors. A single bench of justice Sandeep Kumar, during the last hearing on April 27, had directed him to physically appear before the high court on May 11 and inform how he could return the money of investors. As he was unable to come to Patna on May 11, the case was adjourned for May 12.

According to sources, Subroto Roy has reached Patna and would appear before the court any time from now on. During the hearing on April 27, the Patna High Court had asked the lawyer of Sahara India named Umesh Prasad Singh to submit a detailed report on how Sahara India will return the money of investors of Bihar. Biopic On Sahara India's Subroto Roy Confirmed; To Be Officially Announced On June 10.

In response, Singh had given some alternate methods to return the amount of investors but Justice Sandeep Kumar was not interested in it. He firmly told the lawyer that the court will not tolerate further excuses of Subroto Roy.

Currently, more than 2000 cases pertaining to alleged fraudulency of Sahara India are filed in Patna High Court. Though, the actual numbers of duped persons are in lakhs. Many of them have already died.

(The above story first appeared on LatestLY on May 12, 2022 01:43 PM IST. For more news and updates on politics, world, sports, entertainment and lifestyle, log on to our website latestly.com).