The Indian Army on Thursday displayed several indigenously-developed equipment at an Army innovation event. The equipment displayed at the event, include bulletproof jacket "Shakti" and machine pistol ASMI and surveillance "microcopter". 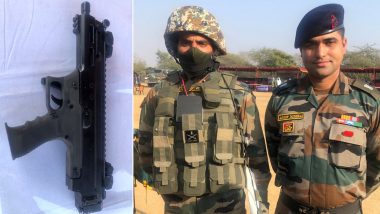 New Delhi, January 14: The Indian Army on Thursday displayed several indigenously-developed equipment at an Army innovation event. The equipment displayed at the event, include bulletproof jacket "Shakti" and machine pistol ASMI and surveillance "microcopter". All the technologies were developed as part of the "Make in India" campaign.

These equipment were unveiled on the day when the Cabinet Committee on Security (CCS) approved a Rs 48,000 crore deal for the acquisition of 83 Tejas Light Combat Aircraft for the Indian Air Force (IAF). HAL Chief Madhavan Welcomes Approval to Tejas Deal; Says It Will Domestic Aerospace Sector.

India's first indigenous machine pistol ASMI developed jointly by Defence Research and Development Organisation (DRDO) and Indian Army. The gun would be offered to replace the 9mm pistols in the defence forces. The machine pistol can fire at a range of 100 metres and is in the class of the Uzi series guns of Israel. The prototype has fired over 300 rounds in the last four months of its development.

the indigenously built microcopter is developed by Lieutenant Colonel GYK Reddy. It has been designed to carry out surveillance. This technology can be useful in locating terrorists hiding in a room. According to a report published in Times Now, Trials of the device were undertaken by a Para Special Forces Battalion based in Jammu and Kashmir. Also known as SWITCH Drone, it can stay airborne for two hours. DRDO Chief G Satheesh Reddy Lauds Indian Scientific Community After CCS Approves 83 LCA Tejas for Indian Air Force.

As per the report, the Indian Army is likely to sign a 140-crore deal with Mumbai-based UAV manufacturer IdeaForge for an unknown requirement of tactical drones. These would be deployed along the Line of Control (LoC). The SWITCH drone has a maximum operating altitude of roughly 1,000 meters. It has 7 kg of weight.

Other equipment put on display are - Reconnaissance equipment which can detect vibration or movement along fences at the LoC, while a wired UDS system able to detect any digging or tunnel activity up to 25 feet.

On Wednesday, the Union Cabinet approved the purchase of 83 Tejas fighter jets for the Indian Air Force at the cost of Rs 48,000 crore, including infrastructure. The CCS approved the largest indigenous defence procurement deal worth about Rs 48,000 crore to strengthen the IAF's fleet of home-grown Light Combat Aircraft (LCA)-Tejas.

Giving out details about the Cabinet decision, the Defence Ministry in a statement said: "The Cabinet has approved procurement of 73 LCA Tejas Mk-1A fighter aircraft and 10 LCA Tejas Mk-1 trainer aircraft at the cost of Rs 45,696 crore along with design and development of infrastructure sanctions worth Rs 1,202 crore." Light Combat Aircraft Mk-1A variant is an indigenously designed, developed and manufactured state-of-the-art modern 4+ generation fighter aircraft.

(The above story first appeared on LatestLY on Jan 14, 2021 06:29 PM IST. For more news and updates on politics, world, sports, entertainment and lifestyle, log on to our website latestly.com).