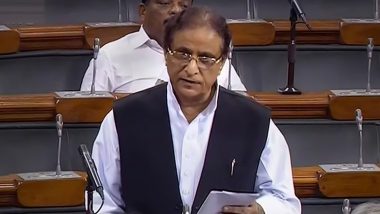 He was received by senior party leader Shivpal Yadav and Ashu Malik and scores of supporters. His sons were also present on the occasion. Supreme Court Grants Interim Bail to Samajwadi Party Leader Azam Khan

From the jail, he went straight to the residence of SP MLA Anup Gupta and later left for Rampur.

A heavy posse of policemen was posted outside the Sitapur jail to control the crowds. Samajwadi Party Leader Azam Khan Gets Bail, To Remain in Jail After New Case

"A new sun is rising on the state's horizon," he tweeted.

"He does not want any fanfare outside the jail and will go to his home in Rampur," said an aide of the MLA.

His wife Tanzeen Fatima thanked all "those who visited us and extended their support to us in our hour of crisis".

The Supreme Court had granted him interim bail on Thursday, giving the much-needed respite to the veteran leader.

His son Abdullah Azam tweeted that his father's release would bring him "like a sun out of the jail and the morning rays would eliminate the darkness of tyranny".

(The above story first appeared on LatestLY on May 20, 2022 09:03 AM IST. For more news and updates on politics, world, sports, entertainment and lifestyle, log on to our website latestly.com).