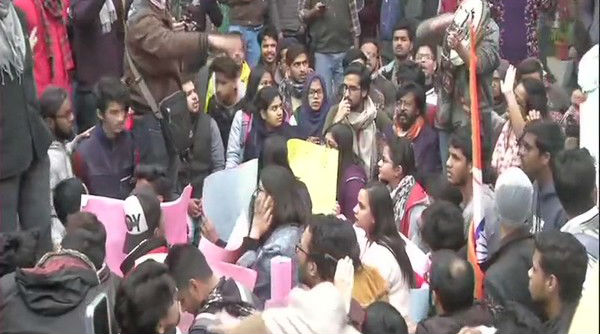 New Delhi, January 13: Hundreds of students were seen protesting outside the office of Jamia Millia Islamia Vice-Chancellor Najma Akhtar here on Monday demanding an FIR against Delhi Police in connection with the December 15 violence in the campus premises.

Students raised slogans against the Vice-Chancellor for the delay in registering an FIR against the Delhi Police. Among other demands, students want rescheduling of exam dates and assurance from the varsity on the safety of students. Jamia Millia Islamia Vice Chancellor Najma Akhtar Confronted by Angry Students Over Delhi Police Crackdown During Anti-CAA Protests.

Talking to ANI on Sunday, Jamia vice-chancellor said: "A team of NHRC had already visited the campus and we have provided the required evidence to them. A team will again visit the university on Tuesday (Jan 14). The commission will take statements and proofs from injured students and witnesses (of December 15 incident). I hope they will try to see through our point of view.

"On December 15, clashes had allegedly erupted between the Delhi Police and Jamia students after a protest against the Citizenship law turned violent.The vice-chancellor also alleged that the police has not filed an FIR in connection with the incident as of now.

Najma had also said that the university authorities had written a letter to the Ministry of Human Resource Development (MHRD) immediately after the incident took place and requested to initiate a high-level probe into the matter. Jamia Millia Student, Allegedly Thrashed by Delhi Police During Anti-CAA Protest, Might Lose Eyesight: Report.

"Exams are going on and the next sessions of the academics will start right after the exams. So I appeal students not to miss any examination and ruin their future because when youth are agitated, others take advantage of them," she added.