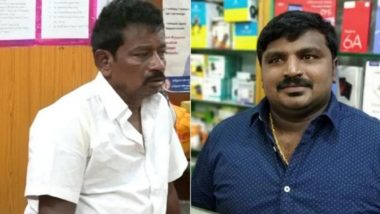 New Delhi, September 26: The Central Bureau of Investigation (CBI) on Saturday said it has filed a chargesheet against nine former police officials in connection with the Tuticorin custodial deaths case. P Jeyaraj and his son J Bennicks, who ran a cellphone shop, were arrested on June 19 for alleged violation of prohibitory orders. Bennicks died on June 22 and Jeyaraj the next day at a hospital due to alleged police brutality, leading to nationwide outrage. Tuticorin Custodial Deaths Case: All About The Killing of Jayaraj and Bennicks That Has Drawn Parallels With George Floyd's Murder.

The CBI said its investigation found that Jeyaraj and Bennicks were tortured at the Sathankulam police station in Tamil Nadu's Thoothukudi, formerly known as Tuticorin. "CBI investigation revealed that the father-son duo were arrested in the evening of 19.06.2020 and allegedly tortured at the Sathankulam Police Station by the accused in the evening as well as in the intervening night, consequent to which both of them succumbed to the injuries and died," read a press release. Tuticorin Custodial Deaths: Tamil Nadu Govt Removes Thoothukudi SP, S Jeyakumar to Replace Him.

The accused include nine suspended policemen of the Sathankulam police station. There area former inspector, two former sub-inspectors, two former head constables and four former constables. The central probe agency had registered two cases on the allegations of custodial death of Jeyaraj and Bennicks on the request of the Tamil Nadu government and further notification from the government of India.

(The above story first appeared on LatestLY on Sep 26, 2020 04:35 PM IST. For more news and updates on politics, world, sports, entertainment and lifestyle, log on to our website latestly.com).