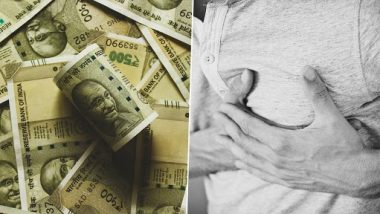 Bijnor, April 1: In a bizarre incident, a thief suffered a heart attack when he found that the money he had robbed was far in excess of his expectation. He could not contain his joy and suffered a heart attack and a large part of the money went into his treatment. The matter came to light when one of the two thieves was arrested on Wednesday in connection with the theft committed last month in the Kotwali Dehat area and he confessed before the police during interrogation.

Bijnor Superintendent of Police, Dharam Veer Singh, said two thieves broke into a public service centre owned by one Nawab Haider on the intervening night of February 16 and 17. Thief Breaks Into Mumbai Businessman's House to Steal But Passes Out After Having Two Bottles of Champagne.

Following a complaint lodged by Haider, over Rs 7 lakh had been stolen from the centre. The police had registered a case against unidentified accused and launched a probe. On Wednesday, police claimed to have cracked the case with the arrest of two accused, Naushad and Ejaz, both in their early 30s, from Alipur under the Nagina police station area.

(The above story first appeared on LatestLY on Apr 01, 2021 12:11 PM IST. For more news and updates on politics, world, sports, entertainment and lifestyle, log on to our website latestly.com).