'Vehicle-March' Launched by 15,000 Farmers From Nashik to Mumbai to Protest Against Farm Laws

Over 15,000 farmers started a 'vehicle-march' comprising trucks, tempos, autos and other vehicles from Nashik to Mumbai to join the agitation programmes opposing the three new farm laws.The 'vehicle march' will take a night halt near Igatpuri and on Sunday morning. 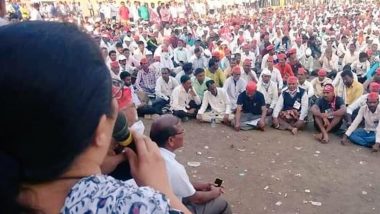 Vehicle March launched by over 15,000 farmers from Nashik to Mumbai (Photo Credits: Twitter/@SDey83)

Mumbai, January 23: Over 15,000 farmers started a 'vehicle-march' comprising trucks, tempos, autos and other vehicles from Nashik to Mumbai to join the agitation programmes opposing the three new farm laws, scheduled in the country's commercial capital over the next three days, top leaders said here.

The All India Kisan Sabha (AIKS) President Dr. Ashok Dhawale said the 'vehicle march' was taken up on the occasion of the birth anniversary of Netaji Subhas Chandra Bose, and many more farmers will join en route to Mumbai.

"The march is in support of the historic two-month long farmers' agitation in Delhi, and we also demand a total repeal of the three farm laws imposed by the Bharatiya Janata Party government at the Centre, and other related issues," Dr. Dhawale said.

The 'vehicle march' will take a night halt near Igatpuri and on Sunday morning resume the long procession, which is expected to reach Mumbai later tomorrow. The farmers owe allegiance to over a 100 organisations under the umbrella of Samyukta Kisan Morcha (SKM) which has given a nationwide call for similar agitations between January 23-26, including taking out rallies to Raj Bhavans in all states.

From Sunday, thousands of farmers will stage a 3-day 'sit-in' protest at Azad Maidan in Mumbai in which the 'vehicle morcha' will also join them, Dr. Dhawale said. On Monday, January 25, a public rally will be held here in which top leaders of AIKS, SKM and the ruling Maha Vikas Aghadi allies in Maharashtra - Shiv Sena-Nationalist Congress Party-Congress - will address, besides other non-BJP political parties in the state.

Among those slated to address the rally are Dr. Dhawale, SKM's Hannan Mollah, NCP President Sharad Pawar, Congress state President Balasaheb Thorat, Shiv Sena Minister Aditya Thackeray, and other political leaders. That afternoon, the rallyists will march in a procession to Raj Bhavan and submit a memorandum to Governor Bhagat Singh Koshyari demanding revocation of the three new 'anti-farmer' laws.

The other demands include enacting a central law guaranteeing MSP and procurement, withdrawal of the Electricity Amendment Bill, repealing the four Labour Codes, vesting all forest, pasture and temple lands in the names of the tillers and resuming implementation of the loan waiver scheme in Maharashtra suspended duo to the Corona pandemic.

On Republic Day, the farmers shall unfurl the National Tricolour at Azad Maidan, sing the National Anthem and take a joint pledge to continue the struggle of farmers and workers till justice is done, Dr. Dhawale said.

(The above story first appeared on LatestLY on Jan 23, 2021 08:39 PM IST. For more news and updates on politics, world, sports, entertainment and lifestyle, log on to our website latestly.com).