The weather agency further said that under the influence of a trough from Karnataka coast to Maharashtra coast, scattered rainfall, thunderstorm and lightning is very likely over Maharashtra during next 2 days. 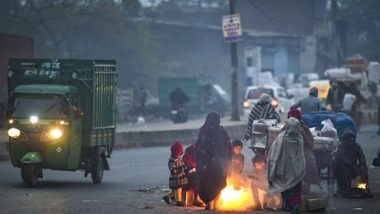 New Delhi, January 8: Coldwave conditions are set to intensify across parts of North India this weekend, the India Meteorological Department (IMD) said. In its all India weather bulletin, the IMD said that cold wave conditions are likely over Punjab, Haryana and Rajasthan during January 8 and 9, 2021. The weather agency further said that under the influence of a trough from Karnataka coast to Maharashtra coast, scattered rainfall, thunderstorm and lightning is very likely over Maharashtra during next 2 days. La Nina in India: Country to Witness More Cyclones, Relatively Colder Winter This Year, Says IMD.

The IMD further added saying that dense to very dense fog is very likely over Punjab and Haryana and dense fog over Delhi and north Madhya Pradesh in the morning hours of January 9, 2021. The IMD said that the change in the weather conditions in the northern states was due to the abundant moisture available in lower tropospheric levels and other favourable meteorological features over the region.

Under the influence of a fresh Western Disturbance, Western Himalayan Region very likely to experience isolated rainfall and snowfall. Moreover, rainfall is very likely over Punjab, Haryana, Northeast Rajasthan and West Uttar Pradesh on January 8, 2021, the IMD said. "Under the influence of cyclonic circulation over Southeast Arabian Sea and another cyclonic circulation over south Tamil Nadu coast widespread rainfall with moderate thunderstorm & lightning very likely over southern peninsular India during next 2-3 days and over Tamil Nadu, Puducherry & Karaikal during next 4 days", the IMD said.

(The above story first appeared on LatestLY on Jan 08, 2021 09:35 AM IST. For more news and updates on politics, world, sports, entertainment and lifestyle, log on to our website latestly.com).