Monsoon has now arrived in almost all the states including Delhi. In the areas where the monsoon has not yet reached, it will also enter in the next few days. 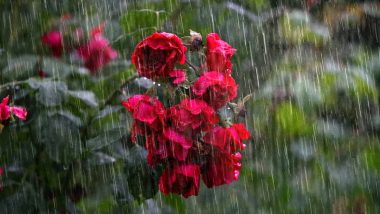 New Delhi, July 2: National capital Delhi got relief from the heat with the first rain of monsoon on June 30. A decrease in temperature has been recorded in Delhi due to the arrival of rain. According to the Indian Meteorological Department (IMD), there will be clouds in Delhi for the next few days and light to moderate rain in expected.

Normal to above-normal rainfall is likely to occur over some parts of north, and central India , and most parts of the southern peninsula, the India Meteorological Department ( IMD ) said in its monsoon forecast for July.

Today in Jaipur, Rajasthan, the minimum temperature can be 24 degrees and the maximum temperature is 28 degrees. At the same time, today Jaipur will be cloudy as well as rain activities will be seen.

Monsoon has now arrived in almost all the states including Delhi. In the areas where the monsoon has not yet reached, it will also enter in the next few days. But in the meantime, the Meteorological Department has put forth worrying information about the monsoon, according to the Meteorological Department, the first month of monsoon i.e. June has passed and in this entire month, 8 percent less rain than normal has been recorded across the country.

Bihar, Jharkhand, Odisha and West Bengal will continue to experience rainfall and thunderstorms during the next four to five days. Odisha may see ‘heavy to very heavy’ rainfall on July 4.

The coastal areas of Andhra Pradesh may see heavy rainfall today with Tamil Nadu and Puducherry expected to receive ‘heavy to very heavy rainfall’ on July 2.

(The above story first appeared on LatestLY on Jul 02, 2022 10:10 AM IST. For more news and updates on politics, world, sports, entertainment and lifestyle, log on to our website latestly.com).