A man was critically injured after he jumped off the eighth-floor of a hospital at the busy Mullick Bazar Crossing in central Kolkata on Saturday. 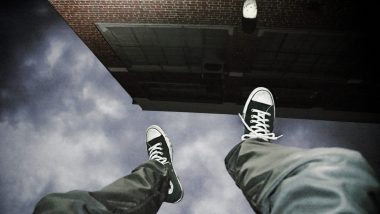 Kolkata, June 25: A man was critically injured after he jumped off the eighth-floor of a hospital at the busy Mullick Bazar Crossing in central Kolkata on Saturday.

Nearly two hours of desperate attempts to rescue the depressed patient, who somehow managed his way to the eighth-floor cornice of the hospital failed, as he finally jumped.

His condition is stated to be "extremely" critical.

Sujit Adhikari was admitted at the Institute of Neurosciences, Kolkata, this morning. He was supposed to be discharged later in the day.

Hospital sources said that the patient had a scuffle with the ward boys, following which he slipped out of the window of the eighth floor of the hospital and sat on the cornice there. Kolkata Shocker: 30-Year-Old BPO Executive Gang-Raped by Senior Colleagues After Office Party, Accused.

State fire services department reached the spot with a hydraulic ladder and made desperate attempts to rescue him. However, every time the firemen reached near him, he threatened to jump. Even a couple of his relatives made failed attempts to pursue him.

He was then constantly supplied with cold drinks and food there only. Meanwhile, the personnel of the state disaster management reached the spot with rescue nets and airbags, so that even if he jumps his life would be saved.

However, as the disaster management department personnel were getting ready to install the rescue nets and put in place the airbags, the patient first started hanging from the cornice and finally jumped.

While falling down, his body collided against the wall of the building twice. A profusely bleeding Adhikari was immediately rushed to the emergency unit where his condition is stated to be extremely critical, according to hospital sources.

(The above story first appeared on LatestLY on Jun 25, 2022 04:21 PM IST. For more news and updates on politics, world, sports, entertainment and lifestyle, log on to our website latestly.com).