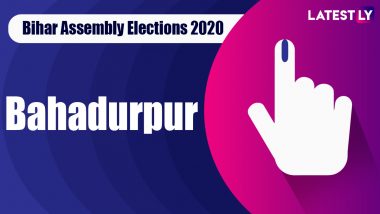 The first phase of the Bihar polls was held on October 28, second on November 03 and the third and the final phase of Bihar Polls 2020 took place on November 7, i.e. Saturday. The EC declared the results of Bihar Assembly Elections 2020 on November 10, i.e. Tuesday.

In 2020 Bihar Vidhan Sabha Elections, it was be a 3-way battle in the Bahadurpur constituency. The three prime candidates from the Bahadurpur seat were Madan Sahni (of JD-U), Devendra Kumar Jha (of LJP), and Ramesh Chaudhary (of RJD). In 2015 Assembly Elections, it was Bhola Yadav of the Rashtriya Janata Dal (RJD) who defeated Hari Sahani of the Bharatiya Janata Party (BJP) by a margin of over 15,000 votes. In 2010, Bihar State Elections, it was Madan Sahni of the Janata Dal-United (JDU) who beat Harinandan of the RJD by a little over 1,000 votes.

(The above story first appeared on LatestLY on Nov 11, 2020 02:57 PM IST. For more news and updates on politics, world, sports, entertainment and lifestyle, log on to our website latestly.com).