'Didn't Your Leaders Visit China?': Congress Hits Back at BJP For Questioning Rahul Gandhi's Visit to Beijing in 2008 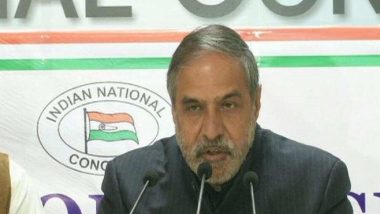 New Delhi, June 25: As the BJP raised questions about Rahul Gandhi's visit to China in 2008, the Congress On Thursday counter-attacked, citing BJP leaders' meeting with the Chinese Communist Party officials and trips to the country. Congress leader Anand Sharma, noting that the party led India's freedom movement and is one of the oldest political parties of the world, said that questioning its patriotism is "outrageous."

Terming it time to set the record straight and expose the BJP's "hypocrisy and double standards", the former Union Minister, in a statement, said: "Party to party delegations' exchange is normal between political parties. Congress has leadership delegations exchange with a large number of major political parties across the world. What is wrong?"

Demanding that BJP call off the "disinformation and sinister campaign" against Congress and Rahul Gandhi, Sharma alleged that the BJP, rattled by questions on "its disastrous handling of India's foreign policy", has launched a malicious disinformation campaign against the Congress on signing a party to party exchange programme with CPC of China, alleging it was against India's interest. Rahul Gandhi Attacks PM Narendra Modi, Asks 'Why China is Praising Prime Minister'.

Sharma said all information is in public domain with Rahul Gandhi, then the Congress General Secretary, signed the youth delegations exchange with Wang Jiarui of the International Department of Central Committee of the Chinese Communist Party. He, then, went on to ask the BJP about several visits of its leaders to China and meeting leaders of Chinese Communist Party leaders here.

"Did (then) BJP President Amit Shah not receive Minister Wang Jiarui in February 2015 along with BJP General Secretaries Ram Madhav, Ram Lal, Bhupendra Yadav and Foreign Department head? "Can the BJP President J.P. Nadda confirm that BJP and Communist Party of China too have institutional leadership delegation exchange? Did not the BJP President lead a delegation to China in January 2011 as CPC's guest?

"Has Ram Madhav not travelled to China many times to meet the CPC leadership? Did not Bhagat Singh Koshiyari, present Maharashtra Governor, lead a 13 member BJP parliamentary delegation to China in 2014 which met Minister Wang Jiarui and attended the Chinese Communist Party school in Beijing?

(The above story first appeared on LatestLY on Jun 26, 2020 12:07 AM IST. For more news and updates on politics, world, sports, entertainment and lifestyle, log on to our website latestly.com).