As Karnataka political chaos deepens, BJP lawmaker KS Eshwarappa had claimed that HD Kumaraswamy government would collapse by July 12 before the Assembly session starts, while all eyes are on Speaker Ramesh Kumar's move whether he would accept the resignation of 13 rebel MLAs. 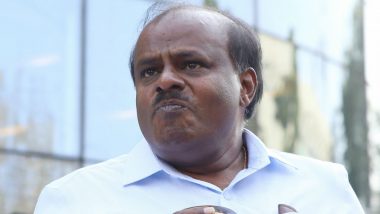 Bengaluru, July 9: With all Karnataka ministers quitting their positions in order to give a free hand to Chief Minister HD Kumaraswamy to reshuffle his Cabinet and save the JDS-Congress government, BJP lawmaker KS Eshwarappa had claimed that the ruling dispensation would collapse by July 12 before the Assembly session starts. In another blow to Kumaraswamy-led state government, Congress legislator Roshan Baig has decided to quit and join the Bharatiya Janata Party (BJP). Meanwhile, Congress MPs Adhir Ranjan Chowdhury and K Suresh have given adjournment motion notice in Lok Sabha over the political situation in Karnataka.

The coalition government in Karnataka is already facing a crisis after 13 MLAs of the Congress-JD(S) combine submitted their resignation to the Assembly speaker on this weekend. Following this, the rebel MLAs were taken to Mumbai and Goa, accompanied by the president of the Mumbai BJP Yuva Morcha Mohit Bhartiya. Congress MLA Roshan Baig to Resign, Join BJP as Karnataka Political Crisis Deepens

Though Congress and JDS allege that BJP is trying to make their government unstable, the Central ruling party had quashed the allegations. On Tuesday, all the eyes are on Speaker Ramesh Kumar, who is expected to examine the resignations by the 13 MLAs submitted to him on Saturday.

Meanwhile, answering to the question raised by Congress leader Adhir Ranjan Chowdhary in Lok Sabha on Monday, Union Defence Minister Rajnath Singh opined that BJP has nothing to do with the political chaos and held Rahul Gandhi for the resignation row in Karnataka. Former state CM Siddaramaiah had, through his Twitter handle, appealed the rebel MLAs to re-consider their resignations.

Considering the number game, after the resignation row, the ruling JD(S)-Congress coalition's total strength is 116 (Congress-78, JD(S)-37 and BSP-1) besides the Speaker. While BJP - with support of two independent rebel MLAs - will have 107 MLAs in a 224-member-strong House. The half-way mark is 113 and if the resignations are accepted by the Speaker, the ruling dispensation in the state will lose the majority, dwindling down to 103 members.

(The above story first appeared on LatestLY on Jul 09, 2019 09:05 AM IST. For more news and updates on politics, world, sports, entertainment and lifestyle, log on to our website latestly.com).