Notably, Choudhary was also the Education Minister in the previous BJP-JD(U) government, but was forced to step down in 2017 after his name propped up in an alleged scam related to building construction and irregularities in appointments to posts of assistant professor and junior scientist. 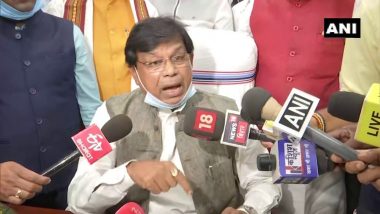 Patna, November 19: Within three days of taking oath to office, Bihar's new Education Minister Mewalal Choudhary was compelled to step down from his post. The Janata Dal (United) submitted his resignation on Thursday, hours after downplaying the allegations levelled against him. His exit is being viewed as the first major setback for the Nitish Kumar-led government in its new term.

Choudhary is accused of being involves in an alleged scam dating back to 2017, involving building construction and irregularities in appointments to posts of assistant professor and junior scientist. The tainted politician, at that time, was the vice-chancellor of Bhagalpur agriculture university. Mewalal Choudhary Fails to Recite National Anthem Correctly, RJD Shares Old Video to Attack Nitish Kumar.

Choudhary, while speaking to reporters till earlier today, denied his involvement in the alleged corruption cases. On being asked whether he should be step down from his ministerial post, the JD(U) leader argued that neither was he indicted in the crime nor a chargesheet was filed against him.

"An accusation is proven only when a charge sheet is filed or a court gives an order and none of the two is there to prove the allegations against me," he had said.

According to reports, pressure had mounted on Chief Minister Nitish Kumar to drop Choudhary from the government. The Opposition Rashtriya Janata Dal (RJD) had launched a relentless campaign seeking his ouster.

(The above story first appeared on LatestLY on Nov 19, 2020 03:46 PM IST. For more news and updates on politics, world, sports, entertainment and lifestyle, log on to our website latestly.com).