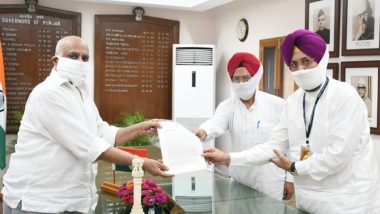 Amritsar, August 4: The hooch tragedy in Punjab has widened the rift in the Congress party with two partymen criticising the Chief Minister Captain Amarinder Singh-led government over the illegal liquor business in the state. Congress MPs Partap Singh Bajwa and Shamsher Singh Dullo have targetted their own state government met Governor VP Singh Badnore on Monday to demand an inquiry by the Central Bureau of Investigation (CBI) and Enforcement Directorate (ED).

"It's a big tragedy. Such a thing has never happened in Punjab. It couldn't have happened without the knowledge of government and police. That is why no action is being taken. How did raw material for liquor come amid curfew?" Shamsher Singh Dullo told news agency ANI. "The government seems to be in cahoots with smugglers," he further said, adding that he had flagged the issue to senior Congress leadership but no avail. Partap Bajwa Writes to PM, Finance Commission to Include All Stakeholders in Expert Group on Agriculture.

Dullo and Bajwa, both former presidents of Punjab Congress, met Punjab Governor VP Singh Badnore and alleged “clear-cut failure” on the part of the state administration and claimed the tragedy could have been averted had the chief minister acted in time on their complaints about illegal liquor businesses. They sought an “impartial and thorough” probe by the CBI and ED.

The Chief Minister has suspended seven Excise and Taxation Officers and Inspectors, along with two DSPs and four SHOs of Punjab Police, in connection with the hooch tragedy, which has so far claimed over 100 lives in the three districts of Tarn Taran, Amritsar rural and Gurdaspur. He also asked Director General of Police (DGP) Dinkar Gupta to apprehend every person involved in the case and move swiftly to ensure stringent action against them.

(The above story first appeared on LatestLY on Aug 04, 2020 03:39 PM IST. For more news and updates on politics, world, sports, entertainment and lifestyle, log on to our website latestly.com).