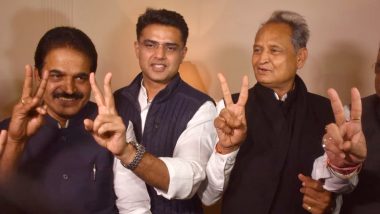 Jaipur, August 13: Warring factions within the Rajasthan unit of Congress apparently reached a thaw as the party on Thursday revoked the suspension of MLAs Vishvendra Singh and Bhanwar Lal Sharma. They were sacked last month after the Congress claimed that incremental evidence suggested their role in "plotting" the overthrow of Ashok Gehlot-led government.

The decision to withdraw the suspension of both the legislators was taken at the legislative party meeting held in Jaisalmer earlier today. Apart from re-inducting Singh and Sharma, 17 other rebel MLAs - against whom the Speaker had earlier issued a show-cause notice - were welcomed back into the party. Rajasthan Political Crisis: Forget and Forgive, Ashok Gehlot Tells MLAs Upset Over Sachin Pilot's Return.

After a consultative discussion, the suspension of @INCRajasthan MLA Sh. Bhanwarlal Sharma ji and Sh. @vishvendrabtp ji is hereby revoked.

At a separate legislature meeting called by the Bharatiya Janata Party (BJP), which was attended by former chief minister Vasundhara Raje, it was decided to move a no-confidence motion against CM Gehlot in the Assembly tomorrow.

"We are bringing a no-confidence motion tomorrow in the Assembly along with our allies," Gulab Chand Kataria, Leader of Opposition in the Rajasthan Assembly, said. He further accused the state government of paralysing governance due to the intra-party feud within the Congress.

Notably, the political crisis in Rajasthan had erupted after then deputy CM Sachin Pilot and 18 other rebel MLAs shifted their base to BJP-ruled Haryana last month. This prompted Gehlot to unite his flock and lodge them at hotels in Jaipur, followed by Jaisalmer. After a month-long logjam, an "amicable solution" was worked out this week following Pilot's meeting with senior Congress leaders Priyanka Gandhi and Rahul Gandhi.

(The above story first appeared on LatestLY on Aug 13, 2020 04:05 PM IST. For more news and updates on politics, world, sports, entertainment and lifestyle, log on to our website latestly.com).