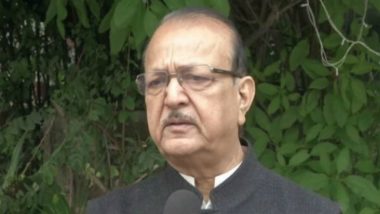 New Delhi, July 27: Bahujan Samaj Party national spokesperson Sudhindra Bhadoria slammed the Congress party for claiming that the BSP MLAs have merged with their party and added that the BSP is a national party and has not merged with any other political party.

Sudhindra Bhadoria told ANI that the BSP, which is a national party, has not merged with any party and their claim that they have merged with their party is false. Therefore, we are doing this in order to protect the constitution, protect the anti-defection bill and also strengthen democracy for which Babasaheb (Dr BR Ambedkar) had made tireless efforts. BSP Spokesperson Sudhindra Bhadoria Says 'Those Responsible for Delhi Violence Should Be Dealt with 'Iron Hand'.

"The anti-defection bill which was passed unanimously in Parliament had the intention of discouraging defections. The Congress has engineered defections time and also in Rajasthan against the BSP," Bhadoria said.

On Rajasthan High court hearing against the BSP unit's merger with Congress, Bhadoria said, "The BSP has made this plea because it discourages any kind of defection and horse-trading. The ruling government in Rajasthan has indulged in horse-trading by engineering defections in the BSP. For this reason, we are making a plea."