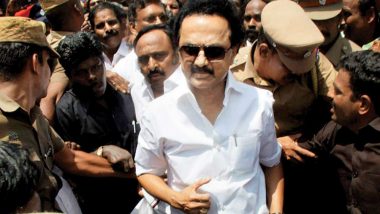 The exit poll shows that a combination of 10-year anti-incumbency factor and the absence of a charismatic successor to J Jayalalithaa are expected to lead to an electoral setback for the ruling AIADMK-led coalition. Assembly Elections Exit Polls 2021: BJP-Led NDA To Win Puducherry, DMK To Storm To Power in Tamil Nadu as Per Times Now/ABP-CVoter.

In the first polls held after the death of Tamil Nadu political stalwarts Jayalalithaa and M. Karunanidhi, the southern state will witness the return of the DMK-Congress alliance.

The vote share of the AIADMK-led alliance will drop by 8.7 per cent, from 43.7 per cent in 2016 to 35 per cent in 2021. Other outfits will continue to remain marginal players in the state.

Region-wise, the exit poll data project that the DMK and its alliance partners are expected to win 32 to 34 seats in Chola Nadu, where the AIADMK-led alliance is likely to get 7-9 seats.

In the Greater Chennai region, while the DMK-led alliance is expected to secure 11 to 13 seats, the ruling AIADMK coalition is projected to win 3-5 seats.

In the Kongu Nadu region in the west, the DMK and its alliance partners are projected to win 33 to 35 seats, while the AIADMK and its coalition partners are likely to emerge victorious on 17 to 19 seats.

In the Pallava Nadu region in north, the DMK and its alliance partners are projected to get 36 to 38 seats, while the AIADMK and its allies are expected to secure 8-10 seats. Tamil Nadu Exit Poll Results 2021: Who is Winning Assembly Elections? Poll of Poll Numbers Predict Majority For DMK-Congress Alliance.

In the Puducherry region, the DMK and its alliance partners are projected to win 15 to 17 seats, while the AIADMK-led coalition is expected to win 2-4 seats.

(The above story first appeared on LatestLY on Apr 29, 2021 11:24 PM IST. For more news and updates on politics, world, sports, entertainment and lifestyle, log on to our website latestly.com).