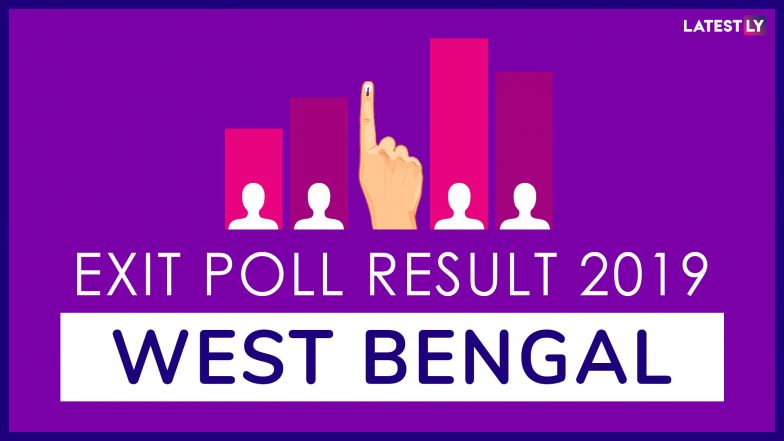 Kolkata, May 19: The exit poll result of Lok Sabha Elections 2019 for 42 high-octane parliamentary seats in West Bengal has been declared. The poll surveys, conducted by various popular research agencies – in tie-ups with news channels, give an edge to state Chief Minister Mamata Banerjee-led Trinamool Congress Party in the state. However, the surveys indicate that the seats of the Trinamool Congress are likely to fall and gain between 28-32 seats. Exit Poll Results For Lok Sabha Elections 2019 LIVE News Updates: Predictions By News18-IPSOS, India Today-Axis, News 24-Today's Chanakya, ABP-CSDS And More

According to the Republic TV-C-Voter survey is giving an edge to TMC with 29 seats. While on the other hand, BJP has is on the gaining side with 11 seats. However, Congress is limping between 2 to seats in the initial trends, while for Left Front is going to lose its seats.

Along with this, Republic Tv - Jan Ki Baat survey is giving an edge to  BJP with 18-26 seats, while TMC is on the losing side with 13-21 seats. Meanwhile, Congress will get three seats, while Left Front would lose its seats.

In the Times Now-VMR survey, TMC is leading with 28 seats, BJP at 11, Congress with two seats and others might secure one seat. As per the ABP-Neilsen survey, TMC would secure 24 seats, while BJP would secure 16 seats. Congress would secure 2 seats, however, Left Front might not open its account. Other exit polls survey too give edge to TMC, but state that BJP would gain between 10-15 seats.

Along with this, aggregate survey results indicate that the vote share for Bharatiya Janata Party is most likely to gain, for the first time in the history of independent India. The profit margin for Left front is most likely to improve than the last 2014 Lok Sabha Elections. On the contrary, the surveys clearly indicate Congress might not be able to gain in the current chaos in West Bengal. West Bengal Lok Sabha Elections 2019 Dates: Constituency-Wise Complete Schedule Of Voting And Results For General Elections

What Are Exit Polls? Know All About Predictions For Lok Sabha Elections 2019

Among the main candidates in the fray include Union Minister Babul Supriyo from Asansol, Abhishek Banerjee from Diamond Harbour, MD Salim from Raiganj, Satabdi Roy from Birbhum, Moon Moon Sen From Asansol, Dinesh Trivedi from Barrackpore, Mimi Chakraborty from Jadavpur, Nusrat Jahan from Basirhat, Bharti Ghosh from Ghatal, and others.

It is to be known that the polling took place in West Bengal in all the seven phases of Lok Sabha Elections and the voter turnout of the state is more than the national polling that took place in the country. With 42 seats in state and TMC indicatively gaining more seats in this Lok Sabha Elections too, the prospects of Mahagathbandhan becoming strong at Centre can’t be ruled out. However, all depends on how much BJP gains or losses in the country, as would decide who would form the government at Centre – BJP or Congress!

Considering the recent incidences of violence in West Bengal and high voter turnout, there are high indications that though TMC might lose some seats, it would be on a safer side this Lok Sabha election too. In 2014, the vote share of TMC was 39.05 per cent, while for the Left Front it was 29.71. BJP had secured 17.02 per cent votes and Congress managed just 9.58 per cent votes. With this, TMC won 34 seats, leaving Left Front at 2, Congress at 4 and BJP at 3 seats respectively.

The exit poll outcome, though weighing in favour of the TMC, are only reflecting the post-election trends. The actual outcome would be revealed on May 23, when the Election Commission of India is scheduled to begin the counting of votes.