After large number of bodies were fished out of Ganga in Bihar and Uttar Pradesh, the West Bengal government asked Malda district administration to step up vigil along the river for bodies found floating downstream and cremate them in keeping with protocol. 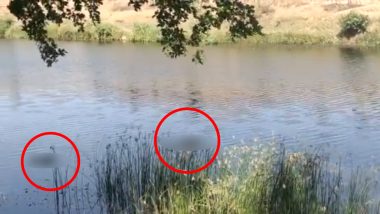 Kolkata, May 13: After large number of bodies were fished out of Ganga in Bihar and Uttar Pradesh, the West Bengal government asked Malda district administration to step up vigil along the river for bodies found floating downstream and cremate them in keeping with protocol.

Ganga enters West Bengal through Malda and so surveillance has been increased in the district to restrict the bodies from entering the state.

According to senior government officials, Ganga touches the state at Manikchawk block via Rajmahal in Jharkhand and so measures have been taken to stop the floating bodies near Manikchawk so that it doesn't reach Farakka barrage. Dead Bodies in Ganga River: 7 More Bodies Seen Floating in UP's Ballia District; Total Count at 52

"The river in Manikchawk is wide and so we are trying to restrict it near Gadai island where the river is comparatively narrow. Gadai island is little away from Manikchawk. It will be easier for us to trace the floating bodies there," a senior district state government official said.

Several boats have been arranged -- near Gadai island of Manikchak block -- to inspect the Ganga from Friday.

Police stations adjoining the river bank in -- Bhutni, Manikchak, Mothabari and Baishnabnagar -- have been alerted as also civil defence volunteers.

"The time of surveillance is yet to be finalized. We are waiting for a nod from the DM. We are announcing for people not to panic.

"As soon such a body is spotted, it would be recovered and disposed of accordingly," the DM said.

"We are taking all measures but considering the present level and current of water in the Ganga, we think the possibility is remote of bodies flowing in in the next 24 hours," a senior administrative official at Manikchawk block said.

The floating bodies attracted government attention after many decomposed and bloated bodies were found floating in the Ganga over the past couple of days, triggering fears among local residents in Bihar and Uttar Pradesh that bodies of Covid victims were being dumped in the river.

While 71 of the bodies have been fished out in Bihar's Buxar district, at least 25 bodies were found in neighbouring Uttar Pradesh's Ghazipur district.

(The above story first appeared on LatestLY on May 13, 2021 02:33 PM IST. For more news and updates on politics, world, sports, entertainment and lifestyle, log on to our website latestly.com).