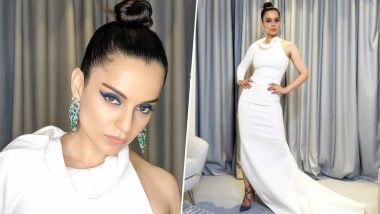 Kangana Ranaut knows how to steal the show, rightly! The actress is not just known to voice opinions by making controversial statements but she also knows how to set the temperature soaring with some chic fashion choices. Kangana who is at the 2019 Cannes Film Festival made a stunning appearance for the Chopard party. The actress looked ravishing in a white single-sleeved gown by Toni Maticevski but it is her blue-winged eyeliner that has grabbed all the attention. Cannes 2019: Priyanka Chopra Jonas Stuns in a Lavender Dress for Chopard Party, Can’t Stop Blushing and Kissing Nick Jonas (Watch Video).

Kangana Ranaut’s style statement has always been on point. Whether it is extra dramatic or all subtle look, Kangy nails every look with absolute perfection. Her first appearance at the red carpet of Cannes 2019 in a kanjeevaram gold saree, later in an ivory gown, how can we not talk about those stunning looks? For the Chopard party, Kangana has completed her look by accessorizing with emerald earrings, a top-knot bun and a pair of grey stilettoes. Cannes 2019: After Rocking a Kanjeevaram Saree, Kangana Ranaut Sets the Temperature Soaring in her Michael Cinco Gown - View Pics.

The other diva who was seen at the Chopard Party was none other than Priyanka Chopra Jonas, who was accompanied by her husband Nick Jonas. She stunned in a short lavender dress and just wowed us with her chic avatar. Stay tuned as we get to you more updates from the gala affair!

(The above story first appeared on LatestLY on May 18, 2019 10:41 AM IST. For more news and updates on politics, world, sports, entertainment and lifestyle, log on to our website latestly.com).