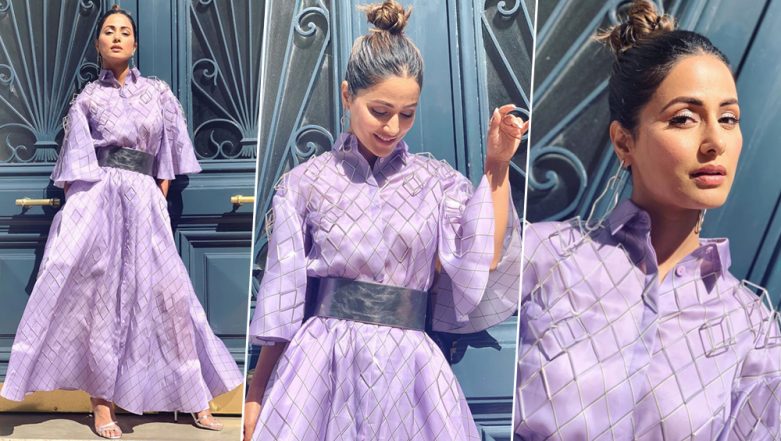 Telly star Hina Khan, who recently bid adieu to Ekta Kapoor's Kasautii Zindagii Kay 2, is known for her outstanding sartorial choices both on and off screen. The actress recently made her debut at the red carpet of Cannes Film Festival 2019 and she grabbed eyeballs with her unique style statement at the international event. Hina Khan looked flawless in a Ziad Nakad couture while she wore her hair in a bun with a curled streak casually falling on one side of her face. Hina, who walked on the red carpet for the first time, however, managed to put her best fashion foot forward, leaving everyone awestruck with her stunning avatar. Kangana Ranaut’s Sister Rangoli Lashes Out At A Magazine Editor For Allegedly Insulting Hina Khan’s Cannes Film Festival Debut!

Thursday marked day 3 of Cannes 2019 festival. Hina Khan, who never fails to surprise us with her sartorial choices, took to the photo-sharing app to share a series of pictures as her Instagram feed and fans can't stop gushing over her look from the big night. Yes, amidst praises and wishes pouring in on social media from fans and colleagues, the actress posted her Day 3 look at Cannes 2019. Hina Khan at Cannes 2019: Here’s All About the Ziad Nakad Gown and Actress' Look From the Big Night

Dressed in lavender collared outfit with flowing sleeves by ARMINE OHANYAN PARIS, Hina looks gorgeous as she poses for the pictures at Cannes 2019.

Hina captioned one of her pictures as, "Forgiveness is the smell that lavender gives out when you tread on it.. #LavenderLove (Mark Twain)"

Forgiveness is the smell that lavender gives out when you tread on it.. #LavenderLove (Mark Twain) . Outfit @armineohanyanofficial Jewels @aquamarine_jewellery Heels @trufflecollectionindia Styled by @sayali_vidya

Another picture's caption read, "Believe in your dreams @festivaldecannes" Here she spoke her out as she, who believed in herself, made her dreams come true.

Believe in your dreams @festivaldecannes .

On the professional front, Hina Khan, who will soon make her Bollywood debut with Lines, soon be seen in Arijit Singh's next music video titled "Raanjhanaa", in which she will be paired opposite Priyank Sharma. Hina has also bagged another project, which is going to be a women-centric film and will be helmed by popular filmmaker Vikram Bhatt! Watch this space for further updates.