It is believed observing Prabodhini Ekadashi Vrat gets one rid of all sins. Those who pray to Lord Vishnu with utmost dedication, they can attain salvation or 'moksha' and get to reside in 'Vaikunth' after death. They are exempted from the cycle of life and death. 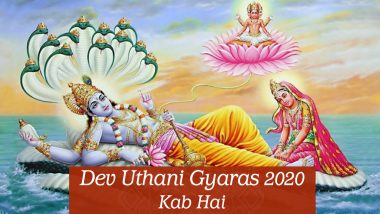 One of the most important observances in the Hindu calendar is Prabodhini Ekadashi. It is known by several names such as Dev Uthani Ekadashi, Kartiki Ekadashi, Kartik Shukla Paksha Ekadashi. There are more names along with their meanings like, Vishnu-Prabodhini or Hari-Prabodhini ("awakening of Vishnu"), Dev-Prabodhini Ekadashi, Utthana Ekadashi ("opening of His eyes"), Deothan, Dev Uthani, Dev Uthav Ekadashi or Dev Oothi Ekadashi ("god's awakening"). But the most important question everyone has online is, "Dev Uthani Gyaras 2020 Mein Kab Hai?" (When is Dev Uthani Gyaras in 2020?) Apart from the date, there are queries over the significance and legends behind this Hindu observance.

It marks the end of Chaturmas, a holy period of four months (July to October), beginning on Shayani Ekadashi—the eleventh day of the bright half, Shukla paksha, of Ashadh (fourth month of the Hindu lunar calendar)—until Prabodhini Ekadashi. Chaturmas, which is considered inauspicious for weddings and other celebrations finally ends with Prabodhini Ekadashi. There are shubh shaadi muhurat or auspicious marriage dates after this observance.

Prabodhini Ekadashi was first narrated by Lord Brahma to Sage Narada and is explained in the 'Skanda Purana'. As per Hindu mythology, Lord Vishnu, who is the main deity of Ekadashi celebrations, is believed to be in the state of yoga nidra or yogic sleep. It is said, the cosmic ocean becomes the bed of the lotus-navel Vishnu as he does meditation during Chaturmas. On Prabodhini Ekadashi, he wakes up from his deep sleep.

There is another tale revolving around the origin of Prabodhini Ekadashi when Devi Lakshmi once requested Lord Vishnu to have a balanced sleep. She said, Hey Narayana, either you remain awake for day and night, or go in a deep slumber for millions of years! This causes an imbalance in the universe and brings destruction to the world. Wouldn't it be better if you have timely sleep timely? This would give me also time to relax. On hearing Maa Lakshmi's concern, Vishnu smiled and said, "Devi, You said right! All the Gods, and especially you face problems because of me. You don't even get time to relax and sleep. Therefore, from now on, I will sleep for four months during the rainy season every year. During that period, you and the other Gods can relax. The Pralaya Kaleen period (when the world will end) will be called my deep slumber (Maha Nindra). The four months of sleep will be my short slumber (Alpa Nindra) and will be highly auspicious for my devotees. During this time, the devotees who will serve me dedicatedly and zealously while organizing the festivities of my sleeping and awakening; I will reside in their homes with you."

Devotees observe holy fast, either partially or fully abstaining from food. Those who observe partial Prabodhini Ekadashi Vrat, they do it by consuming fruits, vegetables, and dairy products. High protein and carbohydrate-containing foods such as beans and grains are not eaten. Rice is avoided at all cost. Devotees wake up early morning and take a holy bath.

After cleaning the house, feet of Lord Vishnu are drawn on the floor with geru and chuna powders. Lord Vishnu's photo or small idol is placed in a pounder (Okhli), which is then filled with jujube, fruits, sweets, sugarcane, and water chestnut (singhara) and covered with a lid. At night, people light diya outside their house and temple. Families get together to worship all the gods and goddesses along with Lord Vishnu, who is then awakened from his deep slumber.

It is believed observing Prabodhini Ekadashi Vrat gets one rid of all sins. Those who pray to Lord Vishnu with utmost dedication, they can attain salvation or 'moksha' and get to reside in 'Vaikunth' after death. They are exempted from the cycle of life and death.

(The above story first appeared on LatestLY on Nov 23, 2020 07:58 PM IST. For more news and updates on politics, world, sports, entertainment and lifestyle, log on to our website latestly.com).