Durga Puja 2019 Maha Saptami Date: When is Nabapatrika Puja or Kala Bou Snan? Know Significance of Celebrations on Day 2 of Pujo in Kolkata

The auspicious and grand Bengali festival of Durga Puja began on October 4. Maha Saptami marks the beginning of Maha Pujo. On this day, a bundle of nine different plants, called Nabapatrika is bathed in the wee hours of the day. 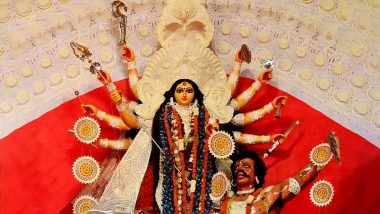 The auspicious and grand Bengali festival of Durga Puja began on October 4, 2019, with Shubho Shashti (sixth day of Navratri). While the six-day festival of Pujo begins on Shubho Mahalaya, the grand celebrations and rituals only start from the sixth day of Devi Paksha. Pujo celebrations are then continued on Maha Saptami (seventh day), Ashtami (eighth days), Navami (ninth day) and Dussehra. Shubho Saptami is the second day of Durga Puja and will be celebrated on October 5, 2019. Maha Saptami marks the beginning of Maha Pujo. On this day, a bundle of nine different plants, called Nabapatrika is bathed in the wee hours of the day. This ritual is called Nabapatrika Puja or Kala Bou Snan. The second day of Pujo is dedicated to Maa Kalaratri. Dussehra 2019 Date and Time: Vijayadashami Puja Vidhi, Shubh Muhurat and Significance of the Hindu Festival Celebrated Post Navratri.

Pujo rituals are an extremely auspicious and important festival for every religious Bengali. Pujo celebrations are seen as a grand event, with preparations beginning months in advance. And as we gear up to celebrate the second day of this grand festival, here is everything you need to know about Maha Saptami.

When is Maha Saptami Celebrated?

Maha Saptami, as the name suggests is the seventh day in the Hindu month of Ashwin. It will be celebrated on October 5, 2019, this year and is a day filled with aartis, bhajans and Pujas for Goddess Durga.

Why is Maha Saptami Celebrated?

Maha Saptami marks the second day of Goddess Durga’s say in her natal home. It is believed that Goddess Durga and her sons, Lord Ganesha and Lord Kartikeya accompanied by Goddess Laxmi and Goddess Saraswati, travel to earth to meet Goddess Durga’s father.

What is the Significance of Maha Saptami?

This ritual is said to speak for the religious significance of this post-monsoon autumn festival. The typically selected plants include not only representative important crops, but also non-crops. In addition to this, there are various aartis and pujas to pray to Goddesses Laxmi and Saraswati as well as Lord Ganesha and Kartikeya, who are said to have accompanied Durga in this journey.

Maha Saptami celebrations include recitation of scriptures and mythological legends of Durga in Devi Mahatmya, social visits to elaborately decorated and illuminated pandals and other fun cultural and religious activities. Durga Puja celebrations are always full of enthusiasm and fervour and people truly celebrate this auspicious occasion by spending some quality time with their family. We hope that this Pujo, all your worries are buried and your happiness quadrupled. Here’s wishing everyone Shubho Saptami and Happy Pujo!

(The above story first appeared on LatestLY on Oct 04, 2019 06:04 PM IST. For more news and updates on politics, world, sports, entertainment and lifestyle, log on to our website latestly.com).