Eid al-Adha 2021 Celebrations: Here's How Muslims Will Celebrate Bakrid With Family and Friends This Year

Muslims around the world celebrate this festival with great pomp and enthusiasm. Here's how Eid al-Adha is celebrated by Muslims. 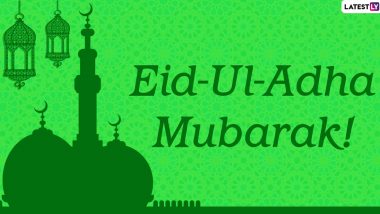 Bakrid or Eid al-Adha 2021 is almost here and this year the dates are most likely to begin on the evening of Tuesday, July 20 and end on Wednesday evening of July 21. Eid-al-Adha is one of the two important festivals celebrated by Muslims around the world. Eid al-Fitr is celebrated a couple of months before Eid al-Adha. Eid al -Adha commemorates the sacrifice of Prophet Mohammad who initially was willing to sacrifice his own son as a gesture of his undying devotion and obedience to God but instead sacrifices a goat upon god's instructions. Bakrid is celebrated during 'Dhu al-Hijjah' - the twelfth and final month in the Islamic calendar.  Muslims around the world celebrate this festival with great pomp and enthusiasm. Here's how Eid al-Adha is celebrated by Muslims.  Eid al-Adha: List of Rules Prescribed by Islam For Animal Slaughtering on Bakrid.

Although they both use the same greeting of ‘Eid Mubarak’, Eid al-Adha should not be confused with Eid al-Fitr. With painting henna tattoos and donning new clothes, the similarities basically end here. The festivities of Bakrid begin with offering a special prayer called ‘Salat al-Eid’, followed by a sermon called a khutbah. Following the prayers, they usually honour the sacrifice of Ibrahim by sacrificing a sheep, goat, or camel in their homes or other sacrificial altars. Each member of the family accounts for a portion of the sacrifice. According to Quran, a goat accounts for one portion of the sacrifice. So people usually opt for a bigger animal to cover the portion of the entire family.

Families then divide up the meat t with their family and friends during the festival. They then distribute it to extended family and friends not present at the festivities and neighbours and at last they offer it to the poor. Celebrations also include cooking up a storm and sharing meals with close ones.

(The above story first appeared on LatestLY on Jul 09, 2021 06:23 PM IST. For more news and updates on politics, world, sports, entertainment and lifestyle, log on to our website latestly.com).